They Actually Eat That: Oysters.

Well, it's been a while since I did this column! I recently got back from New Orleans, AKA "foodie heaven." It's the best place ever if you want to try something you have never eaten before. I looove crawfish, and had my first taste of creole, which is its own thing. Alligator meat is...where else? Florida? A few farms? Basically, New Orleans is not Chicago, which could only ever win awards for "most poisonous junk food." There's really good, unique stuff, there.

Oh, and oysters. I can say I've had oysters, now. 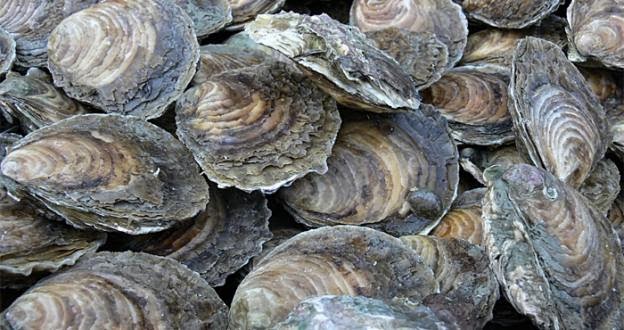 Oysters are everywhere in New Orleans. It's hard to walk down a street there without seeing at least one oyster bar, or at least someplace selling oysters, on your way. Oyster shells can be picked up off the ground, if you have a good eye. Bourbon and Royal Streets, both interesting in their own rights, have their fair share of oyster bars as well as other fun things to look at (every sin known to man and antique stores, respectively).

It's not that oysters are as unique as alligator meat, but, rather, that New Orleans has a lot of them. New Orleans is located right along an estuary - a place where fresh and saltwater mix. This creates a home so ideal for the eastern oyster (Crassostrea virginica) that several oyster reefs can be found right near New Orleans.

An oyster reef (or, confusingly, "oyster bar") is an area where successive generations of oysters thrive. There have been approximately 5,895 oysters recorded with in a single square yard of reef - that's 45 bushels, for the culinarily curious. Flatworms, small fish, and other molluscs all make their home in these massive oyster beds. Other things, such as cow-nose rays, also prey upon the oysters. There are plenty to go around, at least.

So, how do they taste? It depends on how you eat them. If you coat them in butter, seasonings, or anything else, they'll almost inevitably taste like that dressing. It's a little hard to pick out the taste beneath that - I would call it more subtle than mussel. Eaten raw, they supposedly taste exactly like fresh and salt water - both at once. Eat them while you're in New Orleans, for sure.

A bonus point: raw oysters are a scientifically-proven aphrodisiac. Raw, and only raw, oysters, contain zinc and other minerals that boost sperm count. Casanova's secret is backed by scientific fact, so, while raw oysters sound good on a hot day anyways, don't be surprised to find more junk downstairs. If you feel the sudden urge to go down Bourbon St. after slipping in some raw oysters, nobody will blame you. I repeat: It is OK to have fun.

New Orleans has a lot of creative food options. That said, I still haven't gotten bold enough to try escolar, which I did an entry on a while back. It's illegal in a lot of places, but my favorite N'awlins sushi haunt (Ginger Lime - Google map it if you're there!) is not one of them.
Posted by KuroKarasu at 8:47 PM 2 comments: