Oh, scratch that bit about horses having absolutely nothing weird. One of the types of horses that everybody knows about certainly merits a place in Freak Week II.

Yes, those are racehorses. Yes, they are stranger than they look.

Horse racing itself has similar origins as car racing: day-to-day encounters with fellow charioteers naturally resulted in competition between riders, and somebody, somewhere decided to capitalize on the riders' competitive spirits. Nothing wrong with that, although we are sure many would admit that seeing horses run is far more fun than watching cars drive.

No, the horses running is not weird. The horses themselves are.

Most of the horses in racing today are part of a breed called Thoroughbreds. They are a cross between two different types of Arabian (Darley and Gondolphin), Byeley Turk, and English racing horses.  They can come in many coat colors and are bred for a competitive temperament, speed, and agility. Again, no surprises there.

All Thoroughbred horses derive from one of three sires: Herod, Matchem, or Eclipse. Eclipse, a Darley Arabian, was never defeated, and hooo boy did he get immortalized in racing history. 95% of the male horses in racing today are directly related to Eclipse. Think about that for a bit: 9.5 out of ten horses at the track share the same dad, granddad, or great granddad. Creeeeepy.

Hey, bro. Or are you my second cousin?

I'll let Wikipedia tell you exactly why this is terrifying if the idea of you and your running partner sharing the same dad did not cement it in for you:

"According to one study, 78% of alleles in the current population can be traced to 30 foundation animals, 27 of which are male. Ten foundation mares account for 72% of maternal (tail-female) lineages, and, as noted above, one stallion appears in 95% of tail male lineages.[28]"


In other words, these horses are inbred to the degree that it makes purebred dogs look like they're not even cousins. Thoroughbreds are at risk of dying out due to lack of genetic diversity. It is not legit to register Thoroughbreds that have not been seen gettin' it on. No artificial insemination. No embryo transplants. All inbreeding for damn fast horses.
Posted by KuroKarasu at 2:26 PM No comments:

"They Actually Eat That:" Mold.

Asian cultures have a problem with cheese. Not just milk - cheese. As we said in the dragon bone entry, their diets are often deficient in calcium. Milk is one thing (again, why is groping a cow a good idea?), but cheese is essentially rotten milk. It is also delicious for many, many people in the Western world.

If you live in the Western world, we have a task for you: Go to your fridge. Look for some cheese. Then look at something that you haven't touched in days, all slimy and covered in a veritable rainbow of fungi.

Guess what? Unless you have not checked your fridge in a LONG time, that cheese is more rotten than the thing covered with black, white, and red. If you were observant, you may have noticed that some cheeses are "aged" with certain dates. That is how long it takes for the bacteria and fungi to turn milk into certain types of cheese.

So, what makes one bucket of rotten milk different from the next? It depends on what molds, bacteria, and other microbes are hanging out in the milk. Milk intended to be cheese is taken into caves and humid basements for the pleasure of the same organisms that make bread rot.

Many different types of cheese are made with various microbes (and, in some cases, larvae) to create their unique flavors, but European cheese takes the cake when it comes to utilizing mold. Blue cheese and cheese such as Camembert and brie use different Penicillium molds to create the white rind around their creamy middles. Roquefort and other blue cheeses utilize a different sort of Penicillium to manifest their colorful veins. These Penicillium varieties are sometimes named for the cheese they produce, e.g. Penicillium roqueforti. 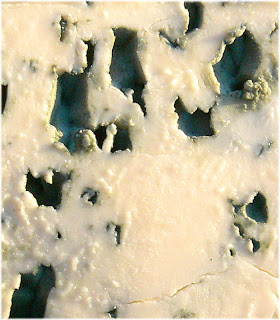 Yes, the Penicillium molds used in making expensive cheese are relatives of the mold used to make penicillin, a very common antibiotic. If one is sick with something Gram-positive, penicillin is the fabulous cure-all. The thought process was the same: Bacteria does not grow on things with Penicillium on/in them. Mold was used as a preservative long before it was a processed medication.

Beneath the microscope...IT HAS CHICKEN LEGS!

Thank blue cheese next time you get a prescribed antibiotic. Then remember that antibiotics are slowly leading to resistant bacteria. Shooot.

Next week: A use for fungus as common as sea monkeys.

Posted by KuroKarasu at 8:53 PM No comments:

Email ThisBlogThis!Share to TwitterShare to FacebookShare to Pinterest
Labels: europe, fungi, They Actually Eat That

Happy April 2nd, everyone! What better way to celebrate the coming of Spring (in one part of the world) than with a flower? 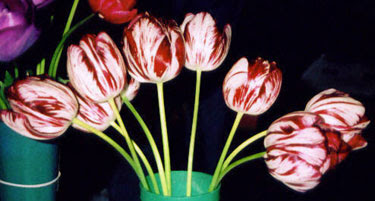 Yes, those are tulips (genus Tulipa), one of the most popular ornamental flowers in the world. These are very special types of tulip called Semper Augustus that was grown back in 17th-century Holland. Do not try to look for one in a flower catalog. You may find similar-looking tulips, but Semper Augustus is an extinct strain of tulip.

What the hell happened?

Back in 1593, tulips were introduced to Europe via the Ottoman Empire. Since they were new and very hard to grow (a tulip bulb only forms once every 7-12 years), they were seen as status symbols. The Dutch became particularly fond of them.

By 1637, the Dutch had gone completely nuts raising tulips. They not only had red, yellow, and white varieties, but began to breed tulips with odd "flames" and streaks on their petals. Several of these odd tulips, including the Semper Augustus and the Viceroy, were so rare and expensive that people would sell the farm to get just one bulb.

Watercolor drawing of a Viceroy. Not worth as much as the actual flower.

No, seriously. Here is what people paid for a Viceroy, which was not even the most expensive bulb in existence:

In modern money, that's around 1,250 USD. Semper Augustus ran for at least twice that. That's a few bills. It is also a lot more than the average Dutch worker made.  Hell, see the cows on that list? Cows are expensive animals. These were very pricey tulips.

Rare color patterns like those found on the Semper Augustus and Viceroy were caused by the tulip breaking virus. It is spread by aphids and also called "tulip mosaic virus," "Lily streak virus," or simply "TMV." This virus causes abnormal white streaks in the tulip's petals. Modern strains of tulip with streaks are just bred that way; no tulips were harmed to make the bulbs available in magazines.

Utilizing this virus to give tulips unique patterns came with a downside: The virus severely stunts the growth of the plant. Successive breeding accelerated this effect so much that the bulb did not develop into a flower, thus ending the genetic line. 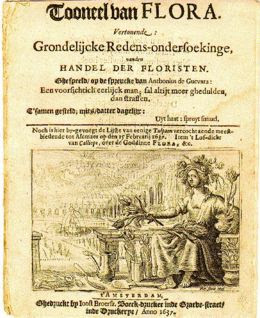 People lost millions breeding impermanent tulips. There were investment pamphlets advising against tulips, frequently citing religious material. Much like homosexuals and abortions today, tulips were considered against Christian morals.  We hope they were not likening it to genitalia, but given how the Christian mind works, it would not have been out of bounds. 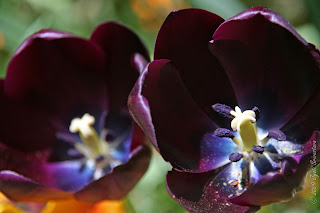 Since then, "tulip mania" has been used to describe any economic bubble. The dot-com bubble, expensive ball pythons, and the subprime mortgage crisis have all been compared to the tulip craze in Holland. Although reports of exactly how many people got into tulips are likely exaggerated, some people were certainly mad about flowers.


Tomorrow: Incense and peppermints...and White Widow.
Posted by KuroKarasu at 9:15 PM No comments:

Before they were lard-laden milk and meat creatures, cows were considered awesome animals. If one had a cow in ancient Greece, it was a status symbol. A cow is a lot bigger than you think it is. More people are killed by pissing off cows than by pissing off sharks. Again, one wonders whose bright idea it was to steal milk from an animal that could easily run one over.

One is forced to wonder that once more upon seeing how badass some cattle look.

Those giant horns belong to Ankole-Watusi cattle, a breed native to southern Africa. They can deal with almost any sort of climate and sparse resources, making them popular around the world. Plus, those horns look awesome.

Ankole-Watusi cattle were bred for gigantic horns. These not only have a practical use - honestly, a lion would probably run from horns that spread 8 feet from tip to tip - but also look beyond badass. The horns also help the cow maintain body heat in its native habitat.

In Africa, these cows were usually kept by royalty, and are still rarely slaughtered for meat. Live animals were more valuable than dead ones in ancient times. We cannot really blame them for treating cows with such magnificent adaptations as special; their horns and hardiness in the harsh African climate cement their status as the "cattle of kings."

Ankole-Watusi cattle were originally imported as zoo animals. Their zebu lineage and massive horns made them eye candy until the 1930's. Afterward, the cattle made it into private collections. Today most zoos would not dare show off a breed of a domesticated animal; apparently, they just aren't wild enough anymore! (Again, we must gun for a "zoo of freaks.")

As one may have guessed, Ankole-Watusi cattle are primarily ornamental. They do, however, have lean meat and milk rich in butterfat. Some breeders choose to emphasize these commercial aspects; others amplify the exotic look. Take your pick as to which you would choose, but in either case, holy cow!

Tomorrow: Tiptoe through the tulips...
Posted by KuroKarasu at 2:38 PM 1 comment: