Hello, it's been a while. Again, I keep intending to post things and never getting around to it. This, however, was too awesome not to post.

Go back through my blog archives. Find the "Who's That Pokemon?" tag. Now, imagine getting up close and personal with some of those creatures.

That was my idea for this year's Members' Night at the Chicago Field Museum of Natural History. Mind, our choices were limited to reptiles and amphibians (I do work in herps, after all), but it was still a fun set up. We will definitely be doing it next year, too, possibly with a few modifications!

Now, I have to admit that the flyers were a little misleading. Initially, we had planned for both more Pokemon and live animals (leopard gecko, tiger salamander, and/or Pudge the Frog - a painted narrowmouth toad (Kaloula picta)). I made fanmade Pokemon for the setup, which will be available for viewing on my DeviantArt account (kurokarasu.deviantart.com). For now, though, let's focus on the setup itself and some of the critters covered on it. 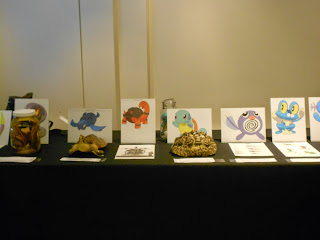 First off, I'd like to apologize for the relatively narrow spectrum, again. For those of you who got the guide, I'm sorry that we didn't have room for Tyranitar, who makes an awesome armadillo lizard, as well as a few other Pokemon we talked about in the ad, but simply couldn't include. The setup still got plenty of attention (nothing quite got my own ear like when a kid walking by yelled "Pokemon!" - that happened a lot), so we did some things right. (I had to correct the setup above, by the way: Tirtouga is the Archelon, Squirtle's kind of a sea turtle like that hawksbill, and that is definitely a Torkoal shell, up there.) 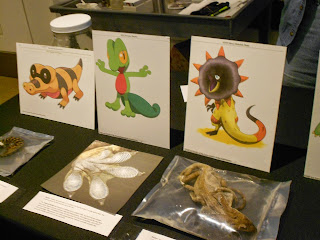 See those critters in baggies? That's what we do in the lab when we don't want to use jars to send things. I got to heat-seal some of these, and they encouraged more interaction with the animals than just having them in glass jars.

I didn't take a photo of this, but one of the stars of the show was a preserved axolotl. For the uninformed, the Pokemon Wooper's name comes from the Japanese word for the axolotl, "wooper looper." Pick your favorite funny-sounding word for the eternally-young, indestructible salamander!

One of the more creative displays from the older staff was a section on Haunter and a cleared and stained horned lizard. Although the idea was the creepiness of the transparent body, it's always worth mentioning that the horned lizard cries high-pressure blood at its enemies. Emos, meet your spirit animal. Alas, I apparently didn't get a good photo of this on my digital camera. 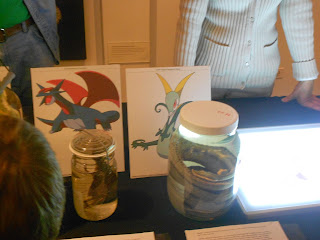 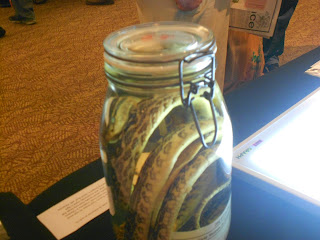 It's hard to say which of these three displays is my baby. Anyone who's known me for a long time knows that I have a huuuuge thing about Serperior being a Baron's Racer (Philodryas baroni), but will not deny that there's probably vine snake in there. The habu and Draco maximus up there were really well-selected, though; if you look carefully on the habu, you can even see its fangs.

Overall, this exhibit was just a ton of fun to design! Two teachers want me to design Pokemon-based lesson plans for their kids, and since ACen hit yesterday (and okay, fine, today) as well, I'm tempted to do a panel on Pokemon as it relates to natural science. It's not something a lot of people think about, and seems to be a hit on more than one front.
Posted by KuroKarasu at 8:20 AM

Email ThisBlogThis!Share to TwitterShare to FacebookShare to Pinterest
Labels: field museum, pokemon, Who's That Pokemon?