That said, armadillos are fascinating creatures. Really, what's not to love about a mammalian pillbug with an anteater face, bunny ears, and sharp, pointy claws? Its native name means "turtle-rabbit," meaning that the armadillo is officially the bastard offspring of the Tortoise and the Hare; apparently they got along reaaaally well after that race. 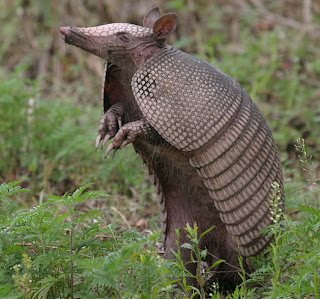 Armadillos in general are mammals belonging to the super-weird superorder Xenarthra, which also includes sloths and anteaters. They eat invertebrates, particularly ants and termites.The nine-banded armadillo (Dasypus novemcinctus) is the only species native to North America; the other 19 species are all farther south. This is largely because the armadillo has few predators up here.

Let's look at the obvious first: Armadillos are scaly mammals. Much like the pangolin, these scales are made of keratin- the same thing that makes up your hair and fingernails. (The same is true of porcupines; Sandslash suddenly makes a great deal of sense.)  As in turtles, the segments of an armadillo's spine are fused with the carapace. There are folds of skin, also scaly, between the main sections of armor in most armadillo species; these are easy ways of classifying armadillos. By the way, no, our nine-banded armadillo can't curl into a ball.

Armadillos spend most of their time underground, digging with those gnarly claws. A single armadillo can have up to 12 burrows in its range, each getting around 8 feet deep. If startled while out of the burrow (probably at night), they can jump up to four feet in the air and run surprisingly fast - prime roadkill fodder.

Get this: aside from looking freakish, armadillos are also the only (multi-cellular) animals to achieve natural cloning. One single, fertilized egg leads to 3-4 genetically-identical offspring; take that, conservatives. They can also suspend their pregnancy for up to two years - y'know, in case the armadillo in question isn't quite ready to have kids yet.  That said, baby armadillos are adorable. 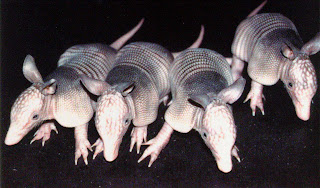 The nine-banded armadillo is the state small mammal of Texas. It is, however, considered a pest and common roadkill even in its 'home' state. Oh, and they can also catch human leprosy. It's funny how such a famous, strange animal can be treated like vermin in Texas...but we love them anyways. They're popular for a reason.