"They Actually Eat That:" Surstromming.

We've looked at some pretty nasty things on this column. Most of them involve eating animals that we Americans would find unpalatable, but the ultimate point remains the same: Humans will eat anything. There are even humans who put wolves to shame by eating things so rotten that we're pretty sure a wolf would drop dead from the mere odor. Not that anyone's tried, but this one would give the legendary jaws and stomachs of the wild a run for their nonexistent money. 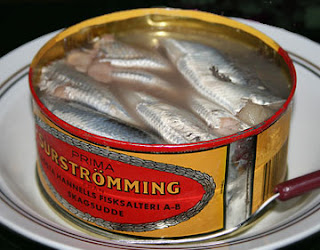 The crowning achievement of smelly, fermented food is a type of canned fish called surströmming. It is often eaten with "thin bread" and enjoyed with light beers. It is found in Sweden - presumably only in Sweden, as will be discussed later. Specifically, it originates from the High Coast (Hoga Kusten) in northern Sweden, which also has a museum devoted to surströmming. There are several cute origin stories for it, but it probably came about as an alternative to brining.

Surströmming is one of many fermented foods from around the world. When something is fermented, that means it is effectively rotten, having been eaten away by bacteria. The herring in surströmming are left to ferment for a couple of months in slightly-salted barrels before they are put into cans. In this case,  Haloanaerobium bacteria produce CO2, making the can swell up. The reactions going on in the also produce odors similar to vinegar, rotten eggs, and rancid butter. This makes the can an effective stink bomb, as well as being high cuisine.

Surströmming is notoriously smelly, even by fermented food standards. It is so smelly that people have been evicted from their apartments without prior notice for spreading it around. The German food critic Wolfgang Fassbender once wrote that "the biggest challenge when eating surströmming is to vomit only after the first bite, as opposed to before." It is largely considered an acquired taste; if that critic's words have any merit, then that taste is hard to acquire.

Still think surströmming isn't the king of one-whiff repulsion? It is banned on several major airlines, including Air France and British Airways. The reason they gave was that the puffed can was at risk of exploding, covering everything in a fishy mess; they probably just wanted to avoid some drunk Swede opening it in the cabin (no offense to any Swedish members of the audience). It already breaks several international toxicity regulations, and Sweden is constantly buying exceptions for its beloved surströmming. It is apparently popular enough in Sweden to warrant its own party and a lot of political SNAFUs.

Of course, this blog entry may well be proven wrong. Someone will probably come up with a smellier food, although surströmming has a pretty colorful history to beat. At least lutefisk smells like soap.
Posted by KuroKarasu at 11:55 PM

Email ThisBlogThis!Share to TwitterShare to FacebookShare to Pinterest
Labels: fish, sweden, They Actually Eat That