It's odd that there hasn't been too much about Lady Gaga for a while. She used to be the biggest thing since sliced bread, but you don't even see her on magazine covers anymore. Still, she was known for wearing crazy stuff like this: 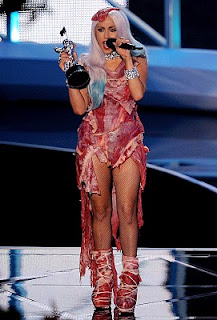 This blog entry is not necessarily about her, however. Meat dresses are not a shiny new thing that Gaga introduced. In fact, the (likely) original meat dress caused just as much controversy and had a much clearer message behind it. 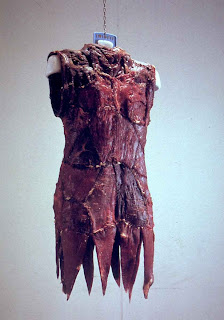 This is Jana Sterbak's Vanitas: Flesh Dress For An Albino Anorectic. In 1991, this meat dress was put on display so as to show the contrast between our obsession with youthful physical appearances and eventual death. It consisted of 50 pounds' and approximately 300 dollars' worth of steak sewn into a dress. The dress was displayed, unrefrigerated, on a hanger next to a photo of a woman wearing the dress in the National Museum of Canada.

Wait. Unrefrigerated? Yes, this dress was just hanging there, decomposing in front of a large audience. It had to be replaced after 6 weeks of being on display. Slightly cheaper meat was used for the replacement, totaling 260 bucks instead of 300. Talk about a temporary exhibit. 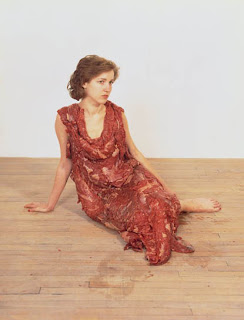 The backlash to this piece was insane. Countless protestors sent in food scraps to the museum. Goodness knows where those all went, but I daresay anybody on staff with a dog had a happy pooch by the time this was over. It's fairly hard to send raw stuff through the U.S. mail, so someone in Canada must have really gone above and beyond.

As much as I like Gaga, I must admit that Sterbak's meat dress is more profound. Gaga's description of her own outfit sounded, well, like it had been cobbled together by her marketing team. Like many of her outfits, the meat dress was a sensation piece. It works just fine regardless of the generation it appears in. It's not like meat will ever be high fashion or anythi- 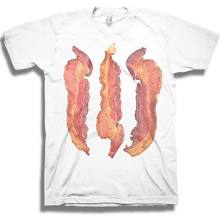