Apologies for the lack of entries. There are two reasons for it: one, vacation in Minnesota and summer in general made a mess of my schedule; two,  I've had a hard time getting motivated. No more of that! This is probably the weirdest creature I've ever seen. Behold...

Yeah, maybe it's time for a refresher on what a tunicate is. Tunicates, sea squirts, and sea salps are, collectively, the weirdest chordates in existence. They start life as free-swimming, tadpole-like creatures with brains, spines, and other very vertebrate traits. When they mature, however, they change entirely, eating their primitive spinal chord and becoming little more than jellyfish or sponges. In this case, the piura becomes a living rock as an adult. Can it have the "best camouflage ever" award? It pretty much ate its brain for it.

Like all tunicates, the living rock is a sequential hermaphrodite. It's born male, then becomes female as it gets older.When it's on the edge of becoming female, it releases both sperm and eggs into a messy cloud in the water. Yes, the living rock can effectively mate with itself if the need arises. Consider your mind blown. 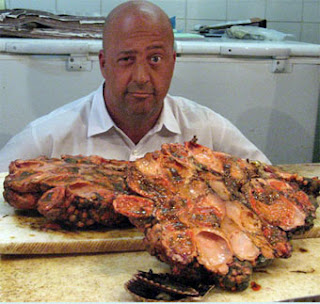 You may have noticed that this is also a "They Actually Eat That" entry. Yes, the living rock is actually edible, and quite popular at that. Peoples in coastal Central and South America are in fact quite fond of eating this tunicate. It has also taken on some popularity in Sweden and Japan. I'm personally more surprised about Sweden than Japan in this instance. It's described as being "bitter and soapy," but supposedly goes great on rice or as fried tunicate meat. Whose idea it was to break apart a rock for food in the first place

There are, however, some concerns about eating piura. For whatever reason, piura meat contains an exceedingly high amount of vanadium- look it up on the periodic chart if you've never even heard of that metal (it probably was not on your chemistry exam). The concentration of vanadium in a single rocky tunicate is ten million times that of the surrounding seawater. Vanadium has been suspected of causing liver damage in high amounts. This has not stopped people from going along the coast and picking up living rocks underwater.

This entry was so weird and strange that I may just go ahead and do a tunicate theme week...hm..
Posted by KuroKarasu at 3:11 PM