Bio-Art: So Human An Animal.

If possible, go check out the bargain bin at a book store, or the book sales at a local library. Books make better friends than cell phones, 3DS's, or any other electronic device on a plane, so it never hurts to have a good book or two when traveling. Bargain bins are an awesome source for good books, if a little worn. You never know what you'll find. 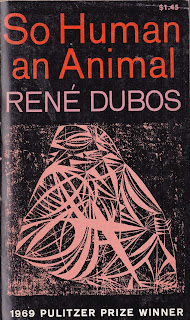 I managed to find this at a discount book sale: So Human An Animal by Rene Dubos. Its whole argument is that, as technology progresses, humanity will start to lose what makes it human. In order to retain our humanity, we must get back to nature on some level. Published in 1968, many of its ideas are now outdated...because we implemented them.

First of all, let me say that this book is well-written. The writer was a French immigrant who did not have English as his native language. Even so, the imagery is excellent, the text well-supported with a million citations (in the back of the book), and the points crystal clear. He writes better than most English-speakers I know. It's pretty enough that I'm calling it art; there is definite skill and beauty, even though it's nonfiction.

Wikipedia does not so much as give one a summary of this Pulitzer-winning book, so the burden falls on li'l old me. In short, the book thoroughly details the influence the environment has on an individual - physically, psychologically, and psychosomatically. The urban environment is particularly toxic, harboring numerous pollutants, overcrowding, and, most importantly, removal from nature. The mindset of "produce more so we can consume more so that we can produce even more" does indeed not make sense, and is a vicious cycle that needs to stop.

And y'know what? We've made steps towards that...or have tried. LEED certified buildings are, for example, both a triumph and an epic fail. They economize on energy, but LEED-certified buildings also tend to abuse glass to help their eco-friendly goals. Birds do not realize there is glass; thus, a lot of bird crashes occur around LEED buildings. Farmer's markets are now fairly frequent in cities, even if the food still comes from far away. Finally, yes, even office buildings are now dotted with greenery to make the area more bearable. Given the prominence of this book, it would not be surprising if many such ideas came directly from it.

So Human An Animal is one of those books that helped shape the modern world as we know it. Aside from perhaps Silent Spring and Thoreau's diary from Walden Pond, no book has had so much to say about man's relationship with nature. It's awesome that I was able to find it in a bargain bin.
Posted by KuroKarasu at 8:50 PM