Remember the bargain bin ?I found another thing in the same bin that proved to have enough merit for an entry. Piers Anthony's Omnivore is marketed as a sci-fi classic, but I had never heard of it, and thought it could not be that bad for just a couple bucks. 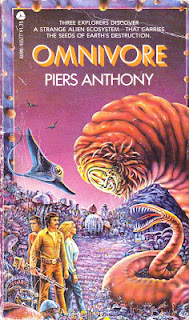 Omnivore tells the story of a government agent seeking information on a certain alien planet. To find this information, he ventures into a small community near a forest. There he finds the last three survivors of a trip to Nacre, an alien planet with a unique ecology, who slowly divulge more and more about their experiences. It was written in 1968, and is the first in a trilogy.

"Alien ecology?" Sign me up! Let's take a look at Nacre's ecology and see what we can see.

The ecology of Nacre is interesting, to say the least. There are no plants. Almost everything is some sort of fungus. They still need water (and can hold it, as a spongy fungus demonstrates), but that's still creative. A lot of research went into creating something so creative and believable, yet alien. Props to the author; you can learn a lot about yeasts, drugs, and Earth ecology by reading Omnivore.

The other lifeforms on the planet are, well, far more bizarre. The animals have all evolved to have amazing eyesight in their one eye, and have exactly one foot. The only herbivores are little, fluffy things with gills that help them process the spore-saturated air. The main carnivores, the "mantas," are strange, manta-like creatures that can flatten themselves into discs and fly in the thicker air as if it were water. The titular omnivore is a nightmarish creature with tentacles and an eyeless snake of a tail. What they lack in diversity, they compensate for in strangeness and creativity.

Compare this to, say, Pandora. There's a lot of life there, but it's all identifiable. Everything there is very Earth-like. There's even a gorgeous humanoid species for us to identify with. It's more like Pandora's an idealized Earth...with dragons. It's really up to you which type of alien ecology you prefer, but I have to give Anthony a cookie for trying something truly different. It's certainly alien.

Unfortunately, Omnivore has something in common with Avatar: both are really heavy on the environmentalism. Factory farming comes up in Omnivore. It's pretty darn clear that humans being omnivores is a bad thing. Conspiracy theorists will find plenty to chew on. Even if the ecology isn't diverse, the messages get across pretty clearly, with very little to get in the way and a lot to think about. It's worth a read, if nothing else. Orn, the next book in the series, has been considered an improvement regardless.