Oh! A Creature Feature! It's been a while, hasn't it? Let's look at the weirdest parrot you've eeeeveer seen: 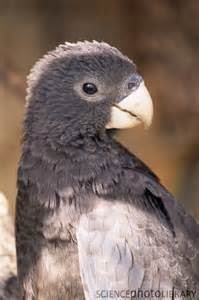 This long-legged, uncanny parrot is a Greater Vasa parrot (Coracopsis vasa). Vasa parrots of all species are native to Madagascar (AKA "that African island with lemurs that got a movie series." Yes, you can get them as pets, but please do your homework.

First of all, these parrots are black. Not gray like an African Gray, not iridescent - gray-black. It's not glossy black, like a crow, but more of a matte black - charcoal black, if you will. That's virtually the last color one expects from a parrot. The pinkish bill stands out, too, making for a striking bird on the whole.

Vasas are thought to be among the most primitive of parrots. Some of you who keep up with animal news might remember a deal a while back when it was found that not all "raptors" - that is, eagles, falcons, hawks, and owls - were related. In fact, parrots are quite closely related to falcons, and the vasa's got some pretty good evidence of this, starting with being a hunting parrot. Females are also larger and dominant, as they are in birds of prey. They also have another very primitive trait that I will get to later, but

Then these parrots start showing their mating colors. What, do I mean that the black suddenly erupts into multicolored plumage? Oh, I wish; vasa parrots have a much stranger mating patterns. Mating groups are open, to say the least, with any given female having 3-8 males in her non-exclusive manharem. The skin of the female turns yellow-orange beneath her feathers while she's tending young...and then she becomes bald so that everybody can see it: 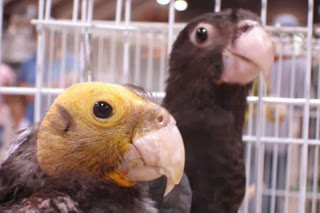 Vasa are also the only parrots to have hemipenes. The cloaca, usually dickless, everts when the birds are mating. The lock can last for up to an hour. That's probably more than you ever wanted to know about parrot sex, but there you go.
Posted by KuroKarasu at 11:13 PM