"They Actually Eat That:" Poutine.

Early on Friday, I'll be headed into Canada. Specifically, I'll be in Quebec, putting years of French into practice. They also seem to have some exotic meats, including things like reindeer, so expect an entry on whatever my curious tongue happens to find. Thanks to the interwebs, I have a fair amount of Canadian friends, too. One of them recommended this: 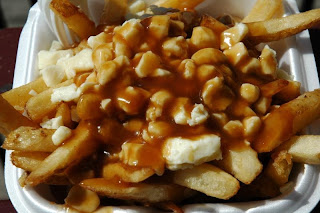 My first thought: "You sure this isn't from Wisconsin? Looks like something they'd do."
Poutine is not from Wisconsin, but is a distinctly Quebecois dish. The recipe is simple: fries, cheese curds, gravy on the whole thing. It started somewhere in rural Quebec, then spread throughout Canada. Even people who don't like French people love poutine.

Indeed, poutine is not French. Even though French fries are, well, not quite French (they were invented in Belgium, but French cuisine does use them), one look at this dish tells me that poutine is American. One of the popular origins of the word "poutine" is "pudding" - as in, this is a dish that makes you fat. Another is linked to the idea that the food will make a big mess - again, not something I can picture the French advertising. It also just looks so darn close to our disgusting cheese fries that I cannot unsee the similarity. Hopefully it tastes a lot better, using fresh cheese curds instead of artificially-colored "cheese."

The exact origins of poutine are a mystery. Everybody and their mother claims that they thought of poutine. We think it came from Drummondville, Quebec. At least, that's one of the places with a yearly festival devoted to cheese, gravy, and fries. The term has been used to describe gravy, cheese, and fries since 1978.

Then the dish became insanely popular. In a poll of the top ten Canadian inventions, poutine was ranked at #10, beating out the BlackBerry and the electron microscope. Canadians seek out poutine whenever they travel. It may as well be Canada's national junk food at this point.

Even if you can't make it to Canada, chances are there's a variation of cheese fries around you if you live in the Western hemisphere. It sounds good, if fattening, and I look forward to trying it.  It may be 740 calories, but sounds well worth trying at least once. I'm not saying it's bad; I'm saying I haven't tried it yet.
Posted by KuroKarasu at 10:46 PM

Email ThisBlogThis!Share to TwitterShare to FacebookShare to Pinterest
Labels: canada, They Actually Eat That