There are a number of advantages to visiting places that naturally have cool wild animals. One, you get to see wild animals in their natural habitats instead of behind glass. Two, the specimens that are behind glass are usually pretty cool. I tend to make it a point to visit the zoo whenever I go somewhere else; it's usually a good indication of how well-informed people are about exotics. The Audubon Zoo in NOLA had quite a treat, and I did not even get to see all of the grounds. 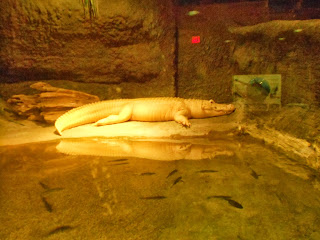 Louisiana's zoo has a pair of leucistic American alligators (Alligator mississippiensis). Apparently they have wild white gators, too, but these were probably captive bred. These particular white gators are celebrities anyways.

A brief course in Alligators 101:the American alligator is native to most of the southern United States, from the Carolinas into Louisiana. These massive reptiles can get 999 lbs for males (who are indeed larger) and 13 feet long. As one could probably guess, most alligators are black- olive green, not white. They have powerful tails, can move faster than a human on land (25 MPH), and are armed with lots of teeth.

So, why is the gator above not albino? Take a close look. The eyes are black, and there is black speckling on the nose. An albino would have pink (or blue?) eyes and no black at all. Regardless, it looks like the swamps of Louisiana might be a "weird gene reservoir" like Florida is for corn snakes. They might also be intentionally protected like the Shirohebi of Iwakuni, but I wouldn't put money on that; the zoo got those white gators from somewhere, then probably bred them. 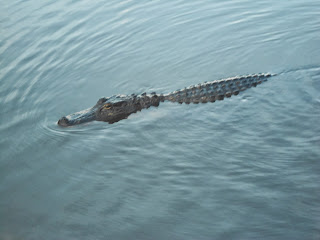 Along with seeing these unique gators in the zoo, I got to get up close and personal with wild alligators in the Louisiana bayou. Our savvy tour guide knew exactly where the gators were and fed  them marshmallows. (Our tour guide, by the way, was apparently the inspiration for a certain firefly in The Princess and the Frog.) Don't take a fan-powered boat; those things move so fast that I'd be amazed if you saw anything. We got to see gators snapping up marshmallows like nothing else. A waste of jaw power? Maybe, but it got us some incredible shots! 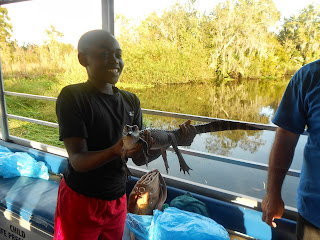 Unlike the whaling trip, on which I saw no whales, this tour boat had a guaranteed way to see an alligator: the boat had a baby on board! These gators are released into the wild when they get to be around two feet long. Imagine having an adult gator on a tour boat; at least you'd get your money's worth!

By the way, Louisiana is known as "hunter's paradise" for a reason. Alligator hunting is not only permitted, but encouraged. Some people also farm alligators (which have their own tours). Alligators certainly aren't an endangered species, and the Louisiana government allows a certain amount of them to be hunted. Don't worry about taking a tooth, paw, or gator head home; if any state knows what to do with alligators, it's Louisiana. Enjoy gator meat while you're there, too.

Posted by KuroKarasu at 9:13 PM