So, I know a few people taking biology, organic chemistry, and other such things. It came up that the only reasons a Classics degree like mine was good were 1. it stokes your imagination like crazy and 2. it helps you name things for science. This led to a discussion about how things are named, including the rather bizarre Dracorex hogwartsia. 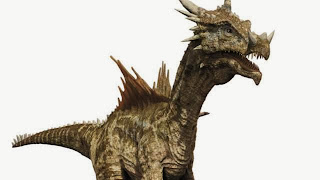 Dracorex hogwartsia was an herbivorous pachycephalosaur  ("thick-headed" dinosaurs). Like a certain other pachy who will definitely be getting some limelight this Halloween, it was discovered in the Hell Creek Formation in South Dakota.

Indeed, this dinosaur does look a fair bit like a dragon. The dome found on most pachies is reduced in Dracorex, leading to a very dragonlike skull. Primeval took advantage of the similarity: in one episode, a knight and a "dragon" crossed a time gap; they went so far as to give the Dracorex little fins, furthering the "dragon" idea.

But "hogwartsia?" Really, science? Forgive my use of internet slang, but "LOL."J.K. Rowling was, of course, thrilled to have a dinosaur name inspired by her work. Warning: people who know Latin tend to know science, and Rowling knows helluva lot of Latin.

Dracorex's odd pseudo-Latin is nothing compared to what some scientists have done with proteins, however. No matter how many pop culture references are named in dinosaurs, they cannot compete with how scientists have named genes and proteins lately. There have been a number of proteins named after video games or video game characters, proving just how nerdy scientists really are.


Hey, weren't the new Pokemon games released this month? Why haven't I done anything on Pikachurin - the electric protein named after the most iconic Pokemon in existence? (There was also a carcinogenic gene that Nintendo sued over - this is not that gene.)

Pikachurin is a protein that helps the perception of light in mammalian eyes. Thisprotein is also known by the equally funny-sounding name EGFLAM ("EGF-like, fibronectin type-III and laminin G-like domain-containing protein")- we'll stick with Pikachu, thanks. It was named after Pikachu because it moved "lightning fast" and conducted electricity from the eyes to the brain. It's pretty much necessary for the human eye to function. Not a bad thing to name after a colorful electric rodent, although I'm sure the protein being discovered in Osaka, Japan had something to do with it. 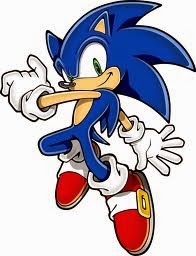 Pikachu was not the first video game mascot to get his own protein. That honor goes to the sonic hedgehog protein. It is one of three genes in the "hedgehog" protein channel, with the other two being "desert hedgehog" and "Indian hedgehog." Sonic is the best studied, and with good reason: this protein has an impact on anything from brain development to the growth of digits and limbs. It's responsible for limb regulation in cetaceans, so if you ever see a dolphin with unearthly feet near the base of its tail, blame Sonic for that.

There have been some objections to naming a gene "sonic hedgehog," namely that it removes some of the sobriety that science is so well-known for. Me? I think once you've named a protein channel "hedgehog," you've already opened yourself to jokes. It's just a slippery slope like that.
Posted by KuroKarasu at 12:20 PM