I Actually Ate That: Crawfish.

For those who do not keep up with my dA page, I have been traveling. A lot. This time, I got to head down south to New Orleans - a city known for sex, drugs, and...smooth jazz? Oh, and excellent food. This was what my adventurous tongue took on my first night in town: 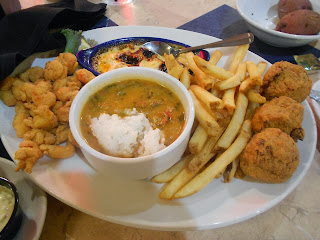 This was a massive platter consisting of crayfish etouffee (the stew-ish stuff), au gratin, dressing balls, and crayfish tails served like popcorn shrimp. They did not tell us that the dish would be very heavily spiced, but that's just what you have to expect in NOLA. That, and Bourbon Street being full of sex and liquor every night.

Crayfish are like lobsters, but smaller. They generally inhabit unpolluted, freshwater areas of all sorts. They will eat anything you put in their tank- even other crayfish. There are some that do make good aquarium pets; please do research if you find crayfish interesting animals and wish to keep one rather than eat it. Otherwise, crayfish of the less friendly sorts are available at bait shops. More on that later.

Not all crayfish are created equal. Almost all of them are sensitive to polluted water. On the flipside, crayfish used as bait or farmed as food can decimate local crayfish populations if they get loose- they eat each other, remember? North American crayfish introduced a nasty water mould, Aphanomyces astaci, into European crayfih populations; the resistant American crayfish (like the signal crayfish below) have taken over. Eating invasive crayfish is a happy solution. Circle of life, now let's eat these guys! 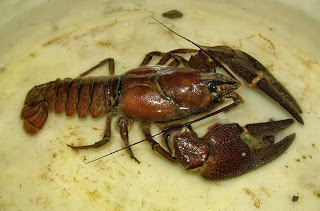 There are a million ways to prepare crayfish, and Louisiana offers a good portion of them in one state. Crayfish tails look almost exactly like popcorn shrimp when breaded, but taste nothing alike. They can be boiled, put in gumbo, served au gratin like lobster, and a million other culinary styles. I've even had crayfish sushi. If you can handle other decapods, crayfish will be no problem for you.

So, what did I think of the four dishes above? I'm not the best judge on land meat; I do, however, like seafood. Without a doubt, crayfish is the best crustacean I have had so far. It has no aftertaste like lobster, is more noticeable than shrimp, and doesn't taste like crab. In cajun cuisine, however, the spices tend to be piled on so thickly that you can't taste much of anything beneath them. I highly recommend etouffee if you want some genuine Louisiana crawdad, and au gratin or as little "popcorn" crayfish tails if you actually want to taste the stuff. The "dressing balls" were almost entirely spices. If you like shellfish already, you'll probably appreciate this Southern favorite. Alligator meat is also pretty abundant, so if that's your ticket, come into the bayou.
Posted by KuroKarasu at 11:16 PM

Email ThisBlogThis!Share to TwitterShare to FacebookShare to Pinterest
Labels: crustaceans, They Actually Eat That