I Actually Ate That: Turtle.

So, while in Vancouver's Chinatown, there were a million food markets showcasing a million foods that Americans would consider "weird." Snakes and (Tokay) geckos on a stick come to mind immediately. There were a few large mushrooms I could not identify. They had tanks of live sole, tilapia, lobster, and crabs. For future reference, the smells mean freshness!

Oh, and I got to try turtle. 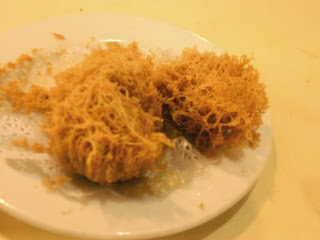 Those are turtle balls. Haha, no, they did not go inside a turtle and take out its junk. That's just turtle meat rolled up into a ball as an appetizer! I quite liked them, even if the sauce was something that I could not quite place (soy? probably). Turtle had a strange taste that I'm having trouble describing, but could probably pick out again. Despite being deep-fried, turtle was actually the most healthful of the dim-sum offered at the beginning of the meal.

Turtle has been used in Chinese medicine for centuries. You've heard the shtick several times on this column: you eat an animal, you gain its superpowers. Turtles are among the most long-lived of reptiles, with the record-holder for chelonians being Harriet at 179 years old- that's over twice the lifespan of the average human. Although that was a Galapagos tortoise and not a soft-shell turtle as is commonly used in cuisine, chelonians in general have an almost sage look to them with lifespans to match. It's not unreasonable to think that they might grant anybody who eats their flesh considerable longevity - maybe even youthfulness.

The kicker is that the Chinese were right about this one. Turtle meat has a number of health benefits according to Western science, too! It's significantly lower in calories than beef, albeit with less protein. It's also rich in vitamins A, B1, B2, and B6, which help make food processing easier. The minerals calcium, phosphorus, and zinc are also abundant in turtle meat. The stuff is pretty much its own vitamin shop if you do rigorous activity, and certainly makes a welcome alternative to your standard meats.

Another, odder turtle product called guilinggao is said to be a miracle worker for the skin. It's a strange jelly made from the plastron (tough belly) of a turtle (preferably the three-lined box or "golden coin" turtle, Cuora trifasciata) and a few other botanical ingredients. It's actually a jelly dessert, thought to be good for the skin. A word of warning for foodies everywhere: not all guilinggao contains actual turtle, despite what you see on the can. 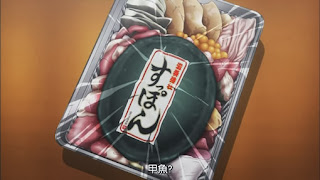 Japan has another version of turtle meat still known as suppon. It's expensive, and usually packaged in plastic wrap like in the above screenie from Railgun S. Like most turtle meat, it's made from soft-shell turtle. Its uses are more cosmetic than medicinal; supposedly, its meat is high in collagen, which any lady out there will remember as being great for the skin. Its blood also supposedly tastes great with wine mixed in. The things people do for beauty, I guess.

Next time you go to Chinatown, take a good look around. Stop into a good restaurant and see what's on the native Chinese menu. They know how to make their food good, regardless of "weird" ingredients. Some of it is even great for you! I also could have tried snake soup, but decided against it...because I'm not really fond of soup, snake or no.

Email ThisBlogThis!Share to TwitterShare to FacebookShare to Pinterest
Labels: china, They Actually Eat That, turtles