When most people think ancient, they think dinosaurs. There is a strange mystique about the Mesozoic - an era without all the cute fuzzy things we know and love today? If you're lucky, you will know that dinosaurs shared their lives with mammals and mammal-like reptiles. Not that anybody points synapsids out beyond Dimetrodon.

Permian and early Mesozoic mammals are cool. Hell, Fred Flintstone could have had something that looked a LOT more like a dog than Dino:

That furry embodiment of the Uncanny Valley is a Cynognathus - literally "dog jaw." It was found in most parts of the Southern hemisphere, including China and Antarctica. Google Imaging reveals several possible catlike coat variations, but the jaw - you know, the thing science actually has to work with - resembles a canid more than a felid, leading to a lot of names involving dogs and wolves.

Cynognathus lived alongside smaller dinosaurs in the Triassic Period. It was a synapisid - a mammal-like reptile with some traits of reptiles, but the jaws and earbones of mammals. Its limbs are a particularly good demonstration of this strange blend: The forelimbs are spread like a lizard's, but the hindlimbs have the more vertical orientation of a mammal's. Who wouldn't want one as a pet?

Despite its cute look and interesting anatomy, few efforts have been made to get the Cynognathus out into the media. The only instance I know of is Ghost Hound - an anime series with a fair amount of prehistoric creatures that appear as 'ghosts.' Cynognathus was, unfortunately, outshone by a certain inugami (a creature that merits its own essay or two, as well as a cracked-out art piece). The idea that 'ghosts' of prehistoric animals remain has a ring of truth; many a monster could be explained if, somewhere out of the corners of our eyes, we caught a glimpse of our own evolutionary past. (Eva, interested in helping me with a cap for this one?) 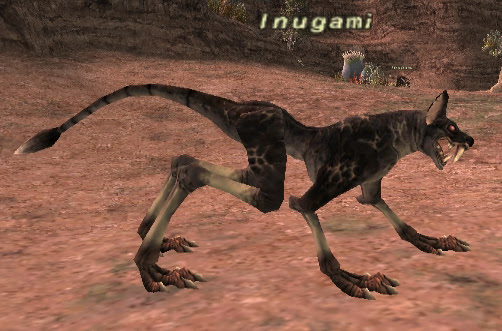 My crack breeding project has come to life!
Posted by KuroKarasu at 11:37 PM