Hey, speaking of bio-art, remember the ball pythons from way back when? There are other reptiles that are almost as pimped when it comes to paintjobs.

There are usually two beginner lizards one sees in pet shops: Bearded dragons and leopard geckos (Eublepharis macularis). Both are easy to take care of and come in a wide variety of colors. It is really up to the individual hobbyist which to get, but the wide variety of leo morphs makes them the more tempting option. Who wouldn't want a pure white lizard? 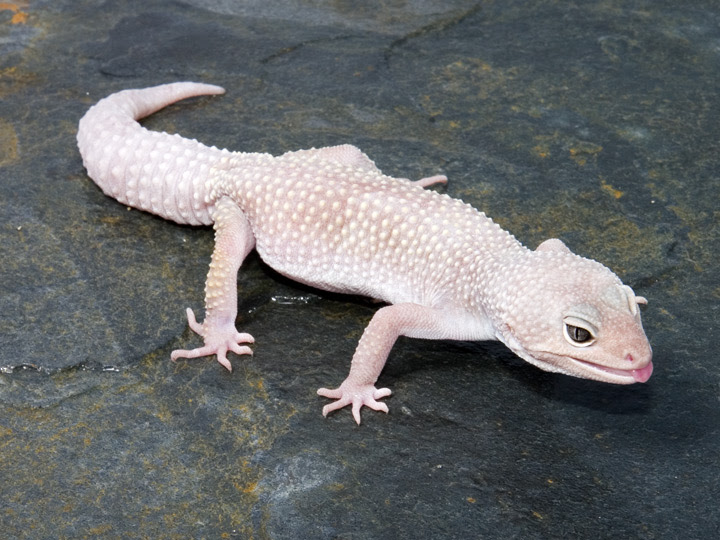 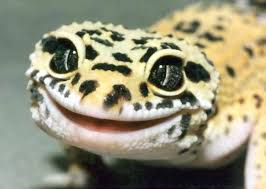 I'm not sure whether to smile or be terrified at this one.

Leopard geckos are native to Central Asia, ranging from Pakistan to India. They live in rocky, dry grasslands. They eat mostly insects, and, in captivity, may refuse dead prey. Like many desert animals, they can endure extreme temperatures. As with most reptiles, they enter a state of hibernation when temperatures get too cold.

Leo geckos are well-adapted for their harsh environment. Their tough skin prevents scrapes from the rocks and sand. Unlike most geckos, it has eyelids. By far the most valuable adaptation of the leo gecko is its tail, which is chubby with fat if the gecko is healthy.

Oh, and it can also detach and regrow said tail.

The leopard gecko is among the many lizards that can break off its tail if grabbed by a predator. It has special fracture points in its chubby tail that snap easily, leaving the predator with a wriggling blob of chubby lizard meat. They regrow the tail, but it is never quite the same.

Temperature is extremely important for leo gecko reproduction. If the eggs are kept at cool temperatures  (about 26–30 °C (79–86 °F)), more females will hatch from the clutch. Intermediate temperatures yield more males. This is called temperature-dependent sex determination (TSD) and is fairly common among reptiles. It just sounds very strange to humans, who are born either male or female from the moment sperm meets egg.

TSD allows breeders to favor certain sexes among their clutches. This helps produce the wide variety of leo gecko morphs in captivity en masse, making them far cheaper than most ball python morphs. Albino? Of course. Purple? They have it. Weird eye color morphs? Check out the Eclipse below.

Katy Perry, try THIS in the next alien video.

Just about the only color these fun little lizards cannot come in is blue/green. As desert animals, they do not make the pigment naturally. That does not keep people from trying to breed for such a strange color, even if it fades out as the babies get older.

Wait a sec...wasn't there a Beanie Baby like that?

Freaky.
Posted by KuroKarasu at 9:11 PM