If one looks around, it is possible to attach almost any noun to the word 'fish' and it will be a legitimate species. Swordfish? Sure. Cow, squirrel, dog, cat, rat, bird, butterfly? Those are all real fish species. Hell, one can put any weapon on a fish and it will be legitimate. We can even pick a random thing like a hatchet and make it a...

Those are marine hatchetfishes (Sternoptychidae). The hatchet form is not as visible from the front as it is in a side-view, but, aesthetically, the thorax forms the 'blade' and the tail forms the 'handle.'  None of that matters once one sees that uncannily-human face staring at them with dead, black eyes and a mournful expression. The side-view is only slightly less disturbing.

As with many creepy fishes, marine hatchetfish live where the sun just barely shines. Their large eyes are oriented upward to help them see prey drifting down from the from the surface. Like many deepsea animals, they have evolved bioluminescence along the bottom of their bodies as a form of countershading.

If you are getting freaked out, do not be. These creepy, fascinating fish are small.  They grow only a few centimeters in length. Many bigger fish eat them. Everything in the abyss is pretty freaky, but at least the hatchetfish does not have teeth so proportionately huge that they curve over its head. It is far from the weirdest thing Tiamat has cooked up.

Also, the freshwater version  is a lot cuter: 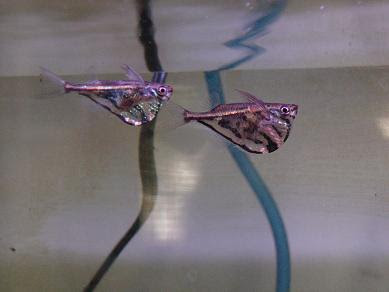