The media like to spit out exactly two versions of the future to us: one, a complete, mechanized, filthy dystopia; two, a less-dystopian world that looks like it was made by Apple by virtuee of how clean and perfect everything is. Both of these visions are usually highly mechanized, leaving out a third type of vision: the evolution of other species. 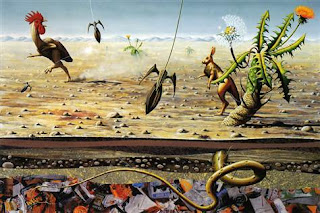 Enter "Neozoic Era," a painting of a different future the media do not want us to see. It takes place in the not-too-distant future. Humans are still around, but oh how the rest of the world has changed. "Neozoic Era" was drawn by Alexis Rockman for Future Evolution, a book written by Professor Peter Ward at the University of Washington. He certainly has some interesting theories about what might happen to other species if things progress at their current rate.

According to Ward, all large mammals aside from humans will be dead. Lions, tigers, and bears, all gone. They aren't versatile and adapt comparatively poorly to human interference. Habitat loss, competition for food, and, of course, hunting will spell the doom of many, if not all, large animals around today. They are all risking an "aurochs" situation. Normally, I'd be in favor of this, but when habitat destruction is factored in, it gets really hard to reintroduce animals back into the wild. Lions and tigers would be pricey pets if they were still around at all.

Ward theorizes that pets would still be around, but reduced to the point where they would be completely dependent on human survival. I want to say it would be like the prospect of mini-dinos in Jurassic Park - we would have very heavily-engineered pets with special nutritional requirements. The future would be filled with things as far removed from their wild counterparts as Chihuahuas are from wolves, if not farther. If we had tigers, they would be kitten tame.

The animals that survive outside of human care will have to be amazingly adaptable.Three very recognizable animal groups meet that requirement: rodents, snakes, and cockroaches. I would personally add rabbits, pigeons, and raccoons to the list. If a dog is so dependent on humans that it literally cannot live outside of humanity, it's bound to get a mean shock to its system when it meets its first super-rabid raccoon.

That's another thing we have to worry about: Superbugs. The cleaner we get, the nastier germs get. They evolve faster than we do. If you need an idea of how crazy these bugs can get and how adaptable they are, there's apparently a microbe in pool water that feeds almost exclusively on human contact lenses. We already have antibiotic-resistant staph. We have no reason to expect that bacteria and other microbes will go away any time soon.

Movies like to present us with either a future so filthy that live cannot go on or a future so clean that man is cut off from the rest of nature. Neither of these visions are realistic. We can picture the majority of species we know going extinct, sure, but new ones would take their place. Life will find a way.
Posted by KuroKarasu at 11:47 PM