Lately, there are just so many reasons to go vegan: cows contribute to global warming; meat is expensive; oh gods, factory farms are horrific.  There are so many reasons to not eat meat that it makes one wonder what else there is. Well, this is a fungus week; you can probably guess that mushrooms are on the list. 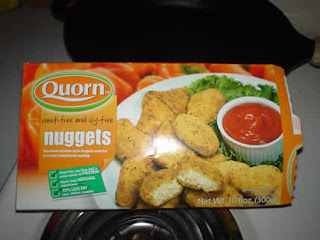 Fungi have been used as meat subs since vegetarianism was a thing. Even outside of being marketed as a meat substitute, large mushrooms are sometimes used as a "meat" in sandwiches due to their texture. Mycoprotein, however, is even more blatanly a meat sub.  It is marketed as Quorn in the U.S. and Europe because, y'know, long Greek names just don't sell.

Mycoprotein comes from the filamentous fungus Fusarium venenatum. It was first discovered in Buckinghamshire, Britain in 1967. The high-protein fungus was officially approved for human consumption in 1985. Since then, it has been in our grocery stores - not only as a meat sub, but also as a sub for fat in dairy and or actual grain in cereal. Yep, even the meat subs are using 'shrooms.

Mycoprotein was originally developed to combat food shortages that would arise from a booming population. F. venenatum's fibers are roughly the same length and width as animal protein, however, and thus is a feasible meat substitute. Now it joins tofu and various nuts as being a "meat"  for people who don't like the idea of hurting animals.

Before you ask: Yes, some people do have allergies to mycoprotein. Fusarium species have been found to contaminate food to the point where it was touted as an herbicide in the past.  If you're sensitive to mold, be wary. For the record, I'm allergic to penicillin, and I've had no problems aside from it kinda tasting funny. If this is what we'll be stuck eating at the end of the world, you'll probably be able to handle it.
Posted by KuroKarasu at 10:29 PM

Email ThisBlogThis!Share to TwitterShare to FacebookShare to Pinterest
Labels: fungi, fungus among us, They Actually Eat That