Fungus Among Us: Basket Stinkhorns.

Still don't think fungi can be made into art? Well, sometimes, nature decides to do the work for us. There are some fungi that look like pieces from a modern art museum, only alive and spontaneously making the landscape a little weirder. 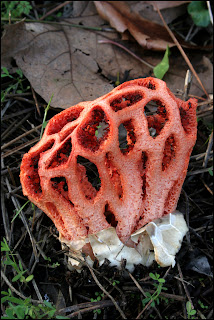 Stinkhorns, particularly those in the Clathus genus, resemble some sort of weird, alien art. Most of the time, they just look strangely like mammalian genitalia. Clathrus ruber, however, has a fruiting body that is bright red and would not look out of place in a museum of modern art. It is also called the basket stinkhorn. Although originally native to Europe, it has since spread to every continent bar Antarctica.

In the case of basket stinkhorns, you guessed it, the fruiting body looks like a basket. It starts looking like a sort of egg on the ground, but blossoms into the strange, netlike structure after some time. Like something out of a sci-fi story, a greenish, spore-filled goop called "gleba "coats the inside of this structure with spores. Just about the only thing creepier would be an alien fetus resting within that net. 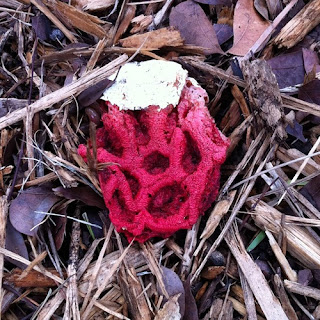 Wait, no. There is something creepier than an alien fetus in that net. As the name 'stinkhorn' might indicate, this fungus reeks of rotten meat. This scent, combined with the latticed structure and bright colors, lures flies into the cage to help spread the spores. Luckily, this only lasts 24 hours after the 'egg' ruptures, so threat of a massive alien invasion are unlikely. The coming of the Lord of the Flies is another story.

For centuries, there have been superstitions about simply touching this fungus leading to illness. It's called "witch's heart" in Yugoslavia. Nobody knows if it's really edible or not; the eggs might be, but the one person who was daring enough to try a 'blossomed' basket wound up getting sick. Something that smells like rotten meat would probably not be good to eat by the smell alone; China's tried anyways.

Email ThisBlogThis!Share to TwitterShare to FacebookShare to Pinterest
Labels: effing everywhere, fungi, fungus among us, mushrooms