If my entry on blue raspberry did not make it clear, it's really rare to find blue things on land. It's just not a color that rolls well on land. Most mammals can't even see blue. As many of you following this blog well know, however, reptiles skew the natural expectations of color so much that blue should be no surprise.

The blue iguana (Cyclura lewisi)  is one of the relatively few naturally-blue creatures out there. It is also called the Cayman Island iguana; for those of you who have no idea where that is, Grand Cayman a large island in the Caribbean. These iguanas can only be found on that one island. Just like green iguanas, these iguanas are mostly herbivorous.

Aside from being blue, blue iguanas are pretty neat creatures. They can live well into their sixties, making them possibly the most long-lived of any lizard given the right conditions. Their eggs are among the largest of any lizard. They are also capable of seeing ultraviolet wavelengths, but have poor nighttime vision. Neat.

Blue iguanas also have a more or less working third eye. Their parietal gland is capable of seeing light and dark- simple, but functional. The only other creature with a third eye anywhere near that good is the tuatara - a reptile so bizarre it has its own category. Perhaps the association of lizards with spiritual enlightenment wasn't too far off; after all, few animals can hold the claim to a working third eye.

The blue iguana is probably one of the rarest reptiles in existence. Only 15 individuals were recorded in the wild in 2003. The reasons for this are entirely the fault of European colonization: one, feral cats and dogs apparently have a thing for iguana meat, and two, cattle farming decimated the iguanas' natural habitat. There are several non-profits devoted to its preservation, along with a few captive breeding programs. Look forward to more on that that in October most likely. For now, know that the population is recovering. It's still one of the most endangered animals on Earth. 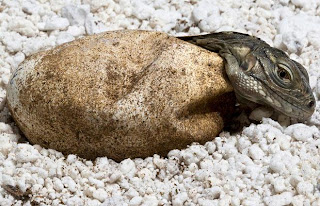