"They Actually Eat That:" Blue Raspberry.

Happy 4th of July, fellow Americans! For those of you not in the States, the 4th of July is when our moshpit of a nation signed the Declaration of Independence. I'm not the least bit patriotic, but did think it would be fun to theme today's entry around the holiday. That said...just how do you make red, white, and blue food? 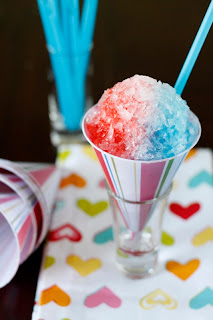 Short answer: Artificial colors. There are several bluish fruits in nature (most obviously blueberries), but nothing produces the bright blue that looks oh-so-nice alongside red and white. There is a blue raspberry in existence (Rubus leucodermis), but even that doesn't produce blue juice. These fruits have high levels of anthocyanins - that is, blue pigments - that make them blue-black and very healthy. Have some blue fruit today!

That said, if health is a concern, avoid things flavored with blue raspberry. The flavor is slightly derived from R. leucodermis, but even if it says that they used real fruit juice, chances are there's a lot of artificial junk in there. It's not that real blue raspberries are rare or anything - it's that our expectations for blue raspberry are far removed from the real thing.

We expect blue raspberry - and, to a lesser extent, blueberry - to be bright blue. ASstated previously, this cannot be done with natural pigments. The most common "blue raspberry" pigment is called "Brilliant Blue FCF." It's used in ice cream, canned peas and a million other things you don't want to know secretly contain poison. It's also used to test soil, apparently. Kiiinda weird, but that's marketing for you.

Brilliant Blue was, at one point, banned in many parts of Europe. Aside from banning it solely on the basis of being an artificial flavor, Brilliant Blue may cause some allergic reactions in asthmatic individuals. It's legal now, but they had their reasons. Here in America, poison is part of the culture...unfortunately. Ah, America. Land of the free, home of the artificial flavors and colors. Our toppings have potassium benzoate. That's bad.
Posted by KuroKarasu at 11:00 PM