It's about time I did another plant. I'm sure the botanists are all raging at me for focusing on the cool animals instead of giving plants more room. It's actually a pretty big problem in ecological sciences; people go into biology to learn about animals, so botany is shunted aside in favor of zoology. Fie upon me for not doing more plants. You rock, you stone, you worse than senseless... 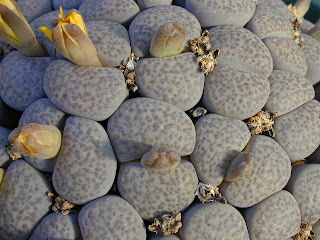 Yes, I swear by Arceus, Ra, and all the various deities that exist that that is a plant. It's called "living stone," "pebble plant," or just plain Lithops. It is native to Nambia and South Africa and has never become invasive. There are some 400-odd populations, each with their own unique colors.

For a plant, Lithops does a very good job of being a rock.  Most of the time, it's not even green. Those rocklike projections can come in as many different colors as rocks themselves: blue, brown, red, you name it. During droughts, they cannot be seen at all, so you never know when living rocks will randomly pop up. Lithops has some of the best camouflage ever -seriously, it was discovered when a scientist wanted to pick up a strange pebble. 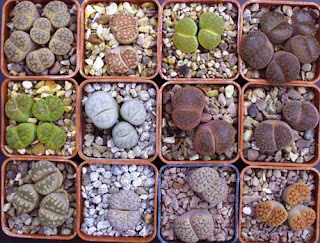 Those stonelike bodies are modified leaves. Between them is a very small stem. Occasionally, you will see a yellow or white flower poking up in between the leaves. These plants do yield fruit, but it is capsule-like and probably not edible. They're mostly there to look weird and store water in the scorching desert.

You can find Lithops at your local garden store. Be warned that these are desert plants and require special soil - cactus formula will do. Do not over-water. Too much sunlight will actually burn the plant.  Keep all these things in mind and you will have the best pet rock ever - a plant.
Posted by KuroKarasu at 8:55 PM