Islands have a lot of fun, unique species. An exhibit at the Field Museum highlights how one species moving to an island can lead to several species over time. Crocodiles aren't usually among those species, but I am not surprised to see the world's largest croc yet popping up in the Philippines. 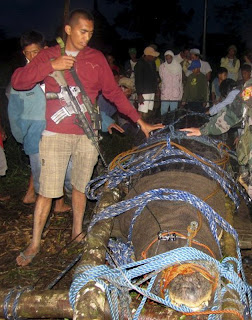 As per Yahoo! News:


"Lolong, a man-eating beast feared by locals, has set a Guinness Book of World Records mark as the world's largest saltwater crocodile in captivity.

The giant crocodile measures 20.24 feet, weighs more than a ton and was blamed for several deaths before its capture by officials in the southern Philippines town of Bunawan in September, 2011.
And while Lolong has brought some tourist dollars into the small town, its capture has also stirred fears that other giant killer crocs might be lurking in the local waters.

"There were mixed feelings," Bunawan Mayor Edwin Cox Elorde told the Associated Press. "We're really proud because it proves the rich biodiversity of our place but at the same time, there are fears that Lolong may not be alone."

In fact, Elorde says he spotted an even larger crocodile escape when he and about 100 others combined their efforts to capture Lolong. It took a combination of ropes and cranes to bring in the giant crocodile, which was pursued after a child was killed in 2009 and a fisherman went missing. Lolong was named after an official who died of a heart attack after traveling to Bunawan to assist in the capture.

Since its capture, Lolong has become something of a tourist attraction and is the star of a new ecotourism and research center in the town. And while the park has brought in $72,000 in park fees since Lolong's debut, most of that money goes to feeding and taking care of the crocodile."


If there are indeed more giant crocs, we might have a reason to suspect insular gigantism. It certainly wouldn't be out of line for an island reptile to grow bigger than its mainland counterpart. The most classic examples of insular gigantism are the Komodo dragon and Galapagos giant tortoises; maybe the Philippines is slowly developing  its own subspecies of giant croc. It wouldn't be the first time simply being on an island led to huge size.

Also, bear in mind that Lolong is the largest croc in captivity. That means there could be even larger crocodiles in the Philippines. We just haven't caught one, yet.
Posted by KuroKarasu at 11:00 PM