There is no creature more prevalent in mythology than the snake. If a culture is near snakes, they've got stories about them. The snake is simultaneously hated and revered, cursed and respected. They are so different from humans that they must be magic. No wonder everybody talks about them!

Then there are some serpentine coincidences that cannot simply be dismissed as coincidences. The white snakes in Iwakuni are a good example; Japan is loaded with eagles, cats, and a million other things that would love to munch an easily-visible snake, but there managed to be a lot of Shirohebi in one place. The Temple of the Azure Cloud in Malaysia has a similar, much more deadly tale to tell... 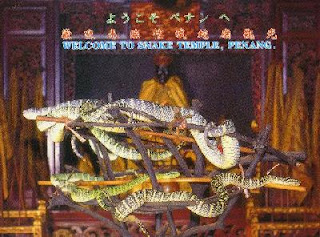 ...thanks to being the home of dozens of Wagler's vipers (Tropidolaemus wagleri), AKA "temple vipers." They are native to Thailand, Sumatra, and Malaysia. Arboreal snakes, they eat rodents, birds, and lizards. They are in the same viper group as rattlesnakes, which should give you an idea of how nasty a bite can be. 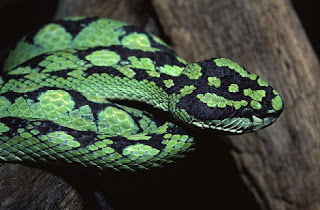 Temple vipers come in a million different color phases. Some are brown; some are orange; some are bright green. They used to be classified as subspecies, but now they're treated more like morphs. In temple vipers, the females are a lot larger (up to a meter long) than the males, so they're nice and easy to sex, too. Y'know, just in case you want the gender of the snake that bit you.

I've gone into the neat adaptations of pit vipers before. Their teeth are organic syringes. They hunt you by heat and scent, both things that mammals have trouble concealing. This snake also has camouflage on its side, coupled with a nice strike that can probably catch birds in mid-flight.  The venom is hemotoxic, which is is own brand of hemorrhagic nastiness. On the bright side, I kid you not, some people think this snake's venom has the potential to remove wrinkles. Whatever floats your boat.

So, why are these snakes at the temple? Legend has it that a Buddhist monk decided to give shelter to the snakes of the jungle. Indeed, there are more snakes there than just the temple viper. Some of them have been defanged, but do you really want to risk messing with one that just got its teeth back in? Yes, snake fangs grow back. Just another reason that mammals are screwed by our own global warming issues.
Posted by KuroKarasu at 11:35 PM