It is really important to know every little thing about every little fish you want to put in an aquarium. Some fish are friendly. Other fish look nice, but have a mean streak a mile wide. Not all pretty fish are good tank fish. 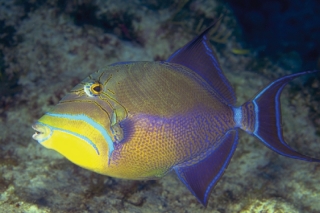 Welcome to the world of triggerfish, a whole group that usually doesn't play nice with others. Several of these fish are popular in the aquarium trade, but today we'll focus on the queen triggerfish (Balistes vetula). It's native to the warm waters of the Caribbean Islands, Florida, and other awesome vacation spots in the Atlantic Ocean. It eats mostly sea urchins, which grants it a few auto-badass points.

This fish just looks impressive. It's big, for one thing - about two feet at adult size. Unlike many big fish, actually has the coloration to make it look good. Its palette is a combination of gold, turquoise, and royal blue. As with all triggerfish, there is a spike-like fin that is  functional as well as fashionable; it can lock the fish in a hole in case a predator tries to pull it out. 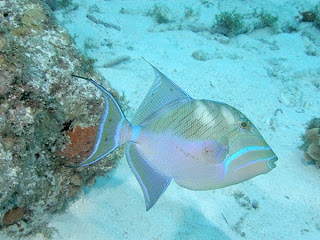 What's even more amazing is how this fish eats sea urchins in the wild. There are two that have been recorded: in one, the triggerfish picks up a single spine of the sea urchin in its (very strong) mouth, then drops it so that the urchin lands belly-up; in another, the queen triggerfish uses Water Gun to get the urchin into a more vulnerable position. Remember, this fish lacks the limbs to break 'em open like a cute little otter. Craftier, stealthier means must be employed.

Queen triggerfish are just about the worst triggerfish to try and keep in an aquarium.  Sea urchins aren't easy to come by unless you happen to have a fresh fish market down the street; instead, feed captive specimens a mix of krill, shrimp, octopus, and squid - the whole invertebrate sushi menu, basically. Queens get roughly two feet in length, which is enough to turn away most beginners. They are also aggressive as all get-out and can inflict very nasty bites on humans, too. Even other triggerfish have nothing on the queen. Long live the queen, and unless you're really experienced, keep her in the wild!
Posted by KuroKarasu at 11:23 PM