If you haven't noticed, there are some groups of animals I just tend to...avoid. As stated in my ribbon seal entry, pinnipeds are one of those groups. That's kind of a shame; plenty of them are strange enough to warrant entries. Some people would consider the simple fact that seals and whales are not related at all mind-blowing. (For those curious: Whales are related to ungulates such as pigs, sheep, and cattle, whereas seals are closer to other carnivorids.) That said, I'm not kidding: some seals really are that weird. 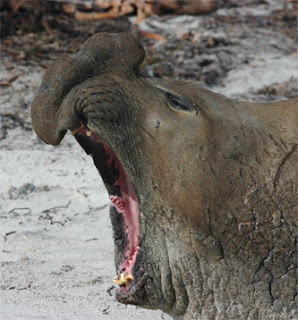 Elephant seals (Mirounga) come to mind as the weird seal. Most seals are at least slightly cute, especially as pups; they have that adorable baby mammal face that yields a collective "awwwww." There are two species of elephant seal, both of which sport the signature nose.  They eat fish and cephalopods - no surprises there. One (the Southern elephant seal, M. leonina) lives in the Antarctic Circle; the other (Northern, M. angustirostris) can be found around the lower part of California. How this happened, I have NO idea.

Nature does not give seals weird noses just to make humans freak out. The elephant seal's funny nose has two distinct, equally-awesome functions. One use is to amplify the male seals' roar; this theoretically keeps weaker males away from the big guy's harem of 40-50 females, but many encounters get bloody regardless.The other use is to help them conserve water; male elephant seals do not leave the beach during the entirety of mating season, so they conserve some moisture from every breath in that nose. If you had a harem of 40 women, you wouldn't leave the beach, either. Admit it.

Not only do the males of the species have those weird noses, but Southern elephant seals are the largest seals in the world. Females get around 10 feet; males get around 20 feet from head to tail. They can weigh up to 4,000 kg or 6.600 pounds- take your pick, both of those numbers are in the thousands. They really do earn that "elephant" title.

These seals have one more stunning thing about them: They are the best divers of any mammal, discounting dolphins and whales. Thanks to a special stash of myoglobin, the elephant seal can stay underwater for two hours. They dive up to 1550 meters below the surface to search for food. Although they aren't related to dolphins and whales,  the elephant seal may be an evolutionary step in that direction.

(For the record, by the way: National Geographic has politely informed me (i.e. asked for a donation by telling me) that there are now officially more tigers in captivity than there are in the wild. Again, I'm not saying this is a good thing - wild tigers are still awesome - but given that the areas with said tigers probably have some corrupt politics going on preventing the wild tiger population from flourishing, isn't it good that we have a plan B?)
Posted by KuroKarasu at 11:34 PM