Monkeys are another group of animals that gets very little press on this blog. With a few rare exceptions, they were never really a favorite animal of mine. It's really about time we had another on this blog; even if I don't like them, I know that a lot of people find monkeys adorable. 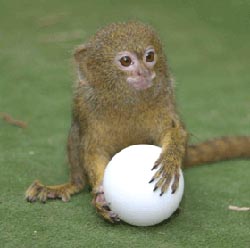 ...and this is one adorable monkey! It's a pygmy marmoset (Cebuella pygmaea), one of the smallest primates in existence! It is native to the rainforests of Brazil, Ecuador, and Peru, presumably existing to make the scientists there turn into piles of mush. It also has nicknames like "little lion" or "pocket monkey" in Portuguese. Yes, it's that cute.

Pygmy marmosets are the smallest monkeys in the world. They are only 14-16 centimeters long, excluding the tail (20cm). In American terms, this monkey does not even reach the six inch mark if you don't count the tail. Despite this, they are capable of jumping around 16 feet (5 meters) - quite a lot for a little monkey! The babies, umm...just look below. Really.

The pygmy marmoset feeds exclusively on tree gum. It gnaws holes in trees with its specialized teeth, then laps the resulting syrup out of the tree. It shares a habitat (and tree juice) with monkeys called Brown-mantled tamarins, who are far less cute. If the trees there run out of delicious sugar, the marmosets will move to sate their sugar cravings. Nature combined the cuteness of a monkey with a diet of nothing but sugar and shrunk it, just to make people squeal at the adorable furball; it's safe to say she hit a weak point.

Pygmy marmosets are very social creatures. They're born as twins, meaning that they've always got a sibling to keep them company. They communicate using every means possible, including scents and a variety of vocalizations.  They may even have the beginnings of language; certain calls are only used in certain situations, such as a particular trill used to communicate over long distances and a chitter if danger approaches. If confronted with a predator, they can and will mob it in an attempt to scare it away. Cute just got serious.

Pet pygmy marmosets are a thing. This does not mean they are a good idea. The babies require feeding every two hours, you cannot keep just one marmoset, and they, like many monkeys, may throw feces at you. Most importantly, you need a permit to even own one legally. Just get a plushie  instead - it's much easier to take care of and will not get you arrested.
Posted by KuroKarasu at 8:51 PM