Nature shows focus too much on big preds, blah blah blah. Seriously, film crews have to spend hours getting those successful hunts on film.  More often than not, the herbivore survives. Predators kill off the weak, very young, or sick. That way both species stay healthy as a whole. 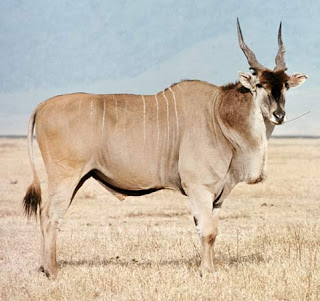 With that in mind, there are some herbivores that are pretty impressive to look at, even without a lion chasing them. The giant eland (Taurotragus derbianus) is one of them. It is native to central and western Africa. Like most antelope, it's an herbivore. What, did you think it had the potential to eat you, too?

The giant eland is impressive on a number of levels. It's fast, capable of reaching speeds of up to 43 mph. A height of almost 6 feet at the shoulder makes it the largest antelope in the world. The babies grow fast. Also, those horns look pretty darn awesome. (Luckily, they're also pretty docile.)

Both sexes of eland have twisting, V-shaped horns. The bulls lock them during courtship, as might be expected. They are also useful for knocking down branches. You will never forget those horns after seeing them once Many antelope have nice headgear, but the eland has to be at least in the top 5 when it comes to having awesome horns.

Despite being listed as "least concern," the giant eland is increasingly threatened by human hunting. This is just not for a very impressive trophy head; the meat of the eland is also packed with nutrition. The milk of an eland also contains twice the protein and three times the content of regular cow milk. They also require a lot less water than cattle. Luckily, there have been quite a few instances of domestic giant elands, so they should be around no matter how desperate Africa gets. Then again...behold the fate of the aurochs: 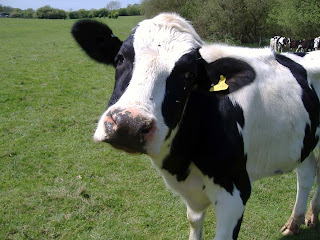 Shoot.
Posted by KuroKarasu at 1:23 AM