Disclaimer: Official movie poster. Screenshots taken by me for this review.

When I wrote the entry on Shiki for this blog, I covered how vampires could theoretically be made possible. Malaria has to be one of the most creative routes I've ever seen for making vampirism real. I also said in my wolfsbane entry that it was very unlikely that a werewolf could ever be made plausible.

So is it actually possible to create a 'realistic' werewolf? Ginger Snaps (the movie, not the cookie) certainly tries. 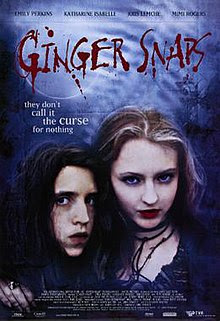 In the middle of nowhere (here called "Bailey Downs"),  Ginger and her sister Brigitte have a fateful encounter with a strange, wolfllike creature. Slowly, they piece together that they do in fact have a real werewolf on their hands....and that Ginger's changes are far from anything a normal teenage girl would go through! Brigitte tries to find a cure with help from a hippie as her sister becomes more and more of a literal sexual predator. Without too many spoilers, it does not end well.

The encounter with the werewolf takes place right before a biology class on viruses. As the symptoms of lycanthropy proceed, Ginger realizes that's exactly what her new changes are: a virus. Before you say that this is impossible, bear in mind that the last few disease scares have been about cross-species viruses. Some viruses, called retroviruses, also rewrite DNA by definition; HIV is the most popular retrovirus out there. You're welcome.


Unlike in most werewolf movies, Ginger's transformation does not happen all at once. It happens very slowly; she gains fur, dewclaws, and a tail over a month as opposed to all at once. She also feels the very real fear and shock that would come with even a slow change like that. Keeping the change a secret becomes harder and harder as the movie goes on. This is far more realistic than the "all at once" transformation that most movies go for. It really does progress like a terminal illness, getting steadily worse until... 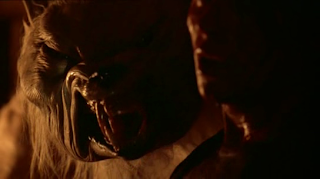 I've read in several places that lycanthropy is always an analogue for puberty: growing hair, changing voice, general bodily changes, and, most importantly, a rise in animal urges. Ginger Snaps picks on one particular part of female puberty, menstruation, and runs with it. For example, one of the symptoms of this form of lycanthropy is bloody urine; this creates a rather funny scene after a male contracts the curse. Although wolves usually aren't associated with menstruation (snakes have an amazing amount of lore to that effect), the coincidence of modern werewolf lore with the period makes it work.

To recap: I'm not a werewolf fan, but I am interested in virtually anything with the potential to cross the human-animal barrier. As such, I have met my share of absolutely terrible writing and films. This is not among them. Ginger Snaps was refreshing on a number of levels. It not only used a woman as the main wolf in the movie (which has a number of interesting implications!), but provided a possible werewolf model for those of us into semi-realism. Surprisingly, very few people into werewolves have taken this route; I don't know what that proves except that it's yet another form of escapism. Woe to them should they ever be cursed for real...