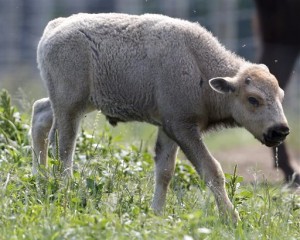 July 28th marks the naming of a white bison calf born in Connecticut. His official sacred name is now "Yellow Medicine Dancing Boy," which will probably get old to either the townspeople or the buffalo after a while. It's probably one of the coolest things that has ever happened in Connecticut, so of course people are excited.

White buffalo are rare. The National Bison Association estimates that only 1 in 10 million buffalo are born white. That's more than one in a million. No wonder people are lining up to see it; genuine white buffalo are a very rare thing. There have been a few other white buffalo in America, the most notable being Miracle in 1994.

There are several ways to get a white buffalo. Albinism and leucism are both in the species. In recent years, a third form has popped up: white produced by cross-breeding with cattle. The baby born in Connecticut will be gene tested just to make sure he is a pure white buffalo. Even so, several native American tribes have paid the buffalo a visit.

Before you ask, yes, people have tried to breed white buffalo. In the instance that someone managed to breed a bunch of purebred white buffalo, it looks as though their particular white strain was dominant (with brown fathers yielding white calves through one white female). I'm not so sure about other populations. These are still pretty rare animals.

Another awesome thing: White buffalo are an excellent example of what this blog originally intended to advertise:A mythic creature brought to life. Yes, seriously. 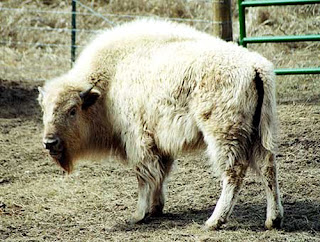 Several Native American tribes treat a white buffalo like a magical creature. The one in the news at the moment is the Lakota. Here is just one of the tales surrounding the sacredness of the white bison:

One summer a long time ago, the seven sacred council fires of the Lakota Sioux came together and camped. The sun was strong and the people were starving for there was no game.

Two young men went out to hunt. Along the way, the two men met a beautiful young woman dressed in white who floated as she walked. One man had bad desires for the woman and tried to touch her, but was consumed by a cloud and turned into a pile of bones.

The woman spoke to the second young man and said, "Return to your people and tell them I am coming." This holy woman brought a wrapped bundle to the people. She unwrapped the bundle giving to the people a sacred pipe and teaching them how to use it to pray.

"With this holy pipe, you will walk like a living prayer," she said. The holy woman told the Sioux about the value of the buffalo, the women and the children.

"You are from Mother Earth," she told the women, "What you are doing is as great as the warriors do."

Before she left, she told the people she would return. As she walked away, she rolled over four times, turning into a white female buffalo calf. It is said after that day the Lakota honored their pipe, and buffalo were plentiful. (from John Lame Deer's telling in 1967).

Even today, the white buffalo strikes the Lakota as a symbol of peace, hope, and rebirth.  Let's hope they're right; if so, the world might not end in December.
Posted by KuroKarasu at 11:54 PM