"They Actually Eat That: " Human Sushi?!

But would they seriously stoop to sanctioning cannibalism? Well....not really, but what they actually do comes pretty close. Allow us to present to you one of the most creative ways of playing with one's food: body sushi.

First of all, the title's misleading. This is not a human body cut up into bits and served as sushi.  This is sushi served on a human being - called nyotaimori if served on a woman ("female body presentation") and nantaimori ("male body presentation") if served on a man. The practice dates back to either geisha entertainment or yakuza meetings, depending upon whom you ask.  It's still rare, but not unheard of in Japanese culture and select Japanese restaurants around the world. 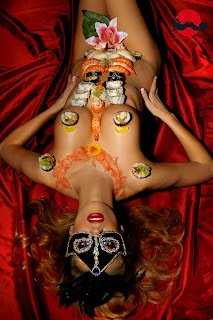 Being a living sushi platter takes intense training. You have to be completely still for hours. If this sounds easy, bear in mind that cold food is also involved. Don't worry about sanitation; every model who does this gets a sanitizing bath beforehand. Point is, even though the models are doing nothing, this is easily the hardest job involving doing absolutely nothing ever. You're covered in sushi and don't get to eat any of it.

There are varying thoughts on the practice of eating sushi off of human beings. China has banned it for health reasons. Quite a few people are freaked out by it. Participants say it's an artform; feminists think it objectifies women. That second point was brought to a head in South Africa, saying it damaged the integrity of the women down there. The practice is not going away regardless. 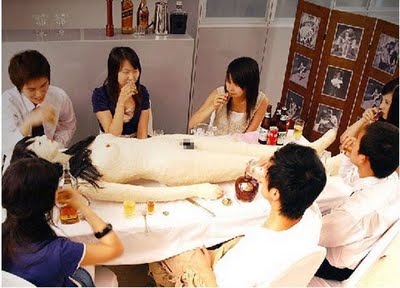 And if that wasn't weird enough? Confuse your inner psychopath with Cannibalistic Sushi. In the same vein as nyo/nantaimori, a realistic human body made entirely out of sushi is wheeled out before the entire table. Realistic "blood" gushes from the skin as soon as it's pierced with chopsticks; all of the innards are edible. Insofar as I know, CS is the only place that does this. So, umm, dig in; there's no risk of getting prions, just the occasional tapeworm.  Trust me, the tapeworm is the lesser of the two evils.
Posted by KuroKarasu at 8:50 PM

Email ThisBlogThis!Share to TwitterShare to FacebookShare to Pinterest
Labels: japan, They Actually Eat That