After being pissed off at a certain statement, I decided that this blog needed to show off more cute scaly things. I just heard today that a ball python was in the news; snakes are getting a worse and worse rap every day. Time to fix that. 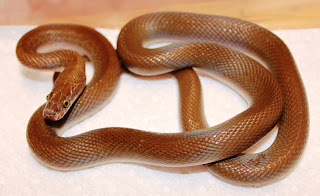 "House snake" can refer to any snake in the genus Lamprophis - literally "shiny snake." Unlike the extremely diverse python family, house snakes are all mid-size snakes (a little smaller than a corn snake - another common snake in captivity) native to most of sub-Saharan Africa. They eat rodents and other small land animals.

There is a lot of confusion over who's in what species; house snakes are poorly-researched, leaving much of the work to be done by captive breeders. Even the captive breeding results vary when it comes to hatching hybridized babies. To make matters even stickier, they are frequently mislabeled in the trade; almost everything is Lamprophis fulginosus. Thus, as much as I hate doing this, the whole genus will be covered in one entry.

Species classification aside, house snakes have a lot in common. House snakes are not venomous. They come in a lot of colors, often sporting iridescence. They only get around five feet long, if that. A million things eat them. Just about the only thing remotely terrifying about these guys are their slit pupils, which most hobbyists find cool.

African house snakes are the definition of cartoon snake: Green or brown, random markings, slit pupils, and otherwise a generic colubrid.  They're just cute like that, even as adults. I realize some people are ophidiophobes by default, but for those of us with the potential to like snakes, house snakes are as charming as they come.

I'm honestly surprised that house snakes aren't more popular in the pet trade. They don't get too big, come in several color patterns and morphs (including albino), and are a great first snake. They can take a high temp range. No extra lighting required; they can breed with normal day sh normal light cycling. Everybody has corns and ball pythons; not many people have house snakes.  The only issue is that some hatchlings need their first few meals lizard-scented. The species thing is another problem entirely; let the pros deal with that one.
Posted by KuroKarasu at 11:32 PM