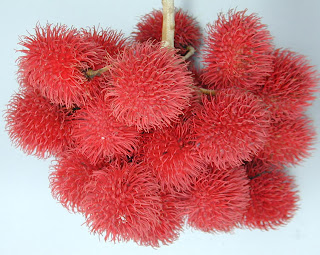 Wait a sec. That's food? It looks like a radioactive hairball, or a pompom that suddenly came to life, or - OK, insert your own here. Point is, if it wasn't growing on a tree, we would have trouble recognizing it as a fruit. Since it is, we must find out if it is edible. Whooo boy is this weird-looking thing edible!

Yes, those red, hairy fruits are called rambutan (Nephelium lappaceum).  They are extremely popular in Southeast Asia and Hawaii. Although the real native range of the fruit is not known (suspected Malaysia and Indonesia), nearly every place in SE-Asia has naturalized rambutan trees. It's related to other tropical fruits, the most common of which in the U.S. of A. is lychee. There is also a weird yellow version grown in Costa Rica, but this entry will focus on the SE Asian versions.

The word "rambutan" means "hairy" in Malay. Indeed, that hairy husk is the most prominent part of the fruit. It is peeled off entirely before eating. Don't worry, it's easier than it sounds. Here's a video if you don't believe me:

The fruit itself is almost like a white grape. Inside the meat of the fruit is a pit, again similar to a regular grape.  As with most foods with heavy pits, the pits are cast aside. Eat the translucent flesh however you like. It has a ton of vitaminsand antioxidants in there, but really, this just looks fun to eat.

Rambutan is quite popular in Southeast Asia. There are some 200-odd cultivars to choose from. Some are bright red, some are yellow, and some strains are just plain more awesome than others. Rambutan is also made into jellies and other flavored products. Almost all of the rambutan there comes from Thailand, so if you want it straight from the source, take a little trip to Bangkok. They can usually be found fresh on the branch, already ripened (because they only ripen on the tree). 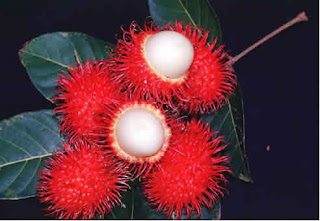 Unlike tamales, I want to try this. This sounds just bizarre and tasty enough to be worth trying. How many people from the West can honestly say they've eaten a fruit that looks like a pom-pom?
Posted by KuroKarasu at 11:41 PM