Confession: No matter how much I write about liking weird, exotic food, I cannot stand Mexican cuisine. Cumin does mot sit well with me. There's something about that culinary style, even without cumin, that just...bugs my taste buds.

Enter a food truck called Tamale Spaceship.  Out of sheer curiosity, I decided to try one...and had a hard time figuring out how to eat it. Even when I did finally figure it out, I was not particularly impressed. Maybe I was still doing it wrong. 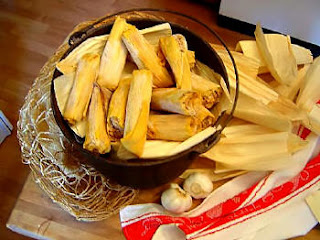 For starters, the idea of wrapping food in leaves of any kind is weird to Americans. This is a shame; leaves are nature's convenient, recyclable wrapping and often less messy than plastic or wax paper in other ways. Point is, we aren't really used to seeing things wrapped in leaves, no matter how delicious they may be. It's pretty common elsewhere.

Tamales have been around since the ancient Mayans. They can be found from Mexico downwards as well as in Southeast Asia. They consist of meat, veggies, cheese, whatever you like, rolled into a dough called masa. Masa is a sort of starchy corn dough that tastes...like corn. The whole shabang is then boiled or fried in a corn leaf. Corn, corn, corn. Yep, there's a lot of corn in tamales. Sometimes, banana leaves are used instead, but when you have corn, use it. 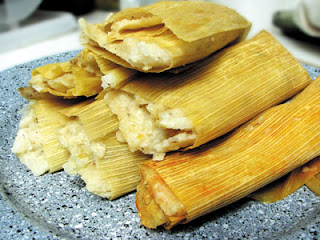 That said, one of the thinfs I did wrong was trying to eat the thing with the leaf still on. Unlike Greek dolma or other leaf-wrapped yummies, you do take the leaf wrapper off of tamales. Not doing so means not enjoying them properly. I doubt the corn leaves will kill you, but it just plain won't taste as good with them on.

Unfortunately, I really can't recommend tamales outside of "try it if you like Mexican." If you like Mexican food already, then you'll probably think that tamales are really neat. If not, then avoid them; you probably won't be impressed. If you've never had Mexican, tamales are as good a dish as any to see if you like traditional Mexican cuisine. They're probably better than Taco Bell in any case.
Posted by KuroKarasu at 11:25 PM