Ah, antelope. The mere word antelope conjures images of wild, open areas and elegant, deerlike animals. Home, home on the range and all that. Screw wolves, antelope should be the ones being called "majestic." Google Image a Thompson's gazelle, one of the most popular prey species for lions on nature documentaries. Look at those horns, that leap, that... 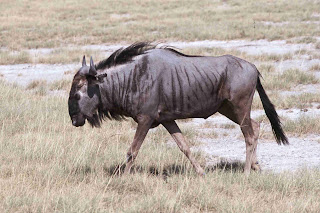 The wildebeest is probably the least enchanting of the antelope living on the African savannah. They look more like oxen than antelope, what with their wide faces, curved horns, and bulky builds. They have squarish pupils like goats, eyes that range from brown to deep red, and have faces that are slender rectangles as opposed to any other shape.  In other words, they're probably the best visible proof that antelope are, in fact, more closely related to cattle than to deer. Even cows don't have spinal ridges like that. The short 'mane' and hump call to mind the 'bad guy' of the savannah, the hyena. Yes, we're still talking about an herbivore.

Wildebeest have exactly two presentations in popular culture: As food or as something utterly terrifying. Most of us probably first learned of wildebeest from The Lion King, in which - spoiler alert - a stampede of red-eyed, horned faces tramples poor Simba's father. I can see a number of reasons for them to pick wildebeest as opposed to some other ungulate, but the one that sticks out the most is that wildebeest and those hyenas both have a menacing, brutish hump that just makes them look evil. They're even colored similarly. Even though wildebeest themselves are completely benign, they can easily be sold as the most menacing antelope ever.

Interestingly, the wildebeest stampede in The Lion King may have been based off of an actual event.  Every year, massive herds of wildebeest and zebra migrate away from the Serengeti, the most filmed place on the planet. (Note how, even in the movie about this epic migration, the wildebeest are slated as prey for a cheetah- not that it isn't realistic.) Scientists think that this is due to the availability of surface water. They have also observed a sort of collective intelligence among the migrating herd - a hive mind that makes them conquer the obstacles on their path as one. (Humans seem to have the opposite mentality, acting more like idiots when in a group.) Horns, check; sinister eyes, check; evil hunch, check; hive mind, check.

The wildebeest is so famously monsterlike that ancient people actually made a monster out of it. Going back as far as ancient Greece, the wilderbeest of Ethiopia (itself kinda legendary) was mutated into the legendary catoblepas- a monster with the head of a boar and the body of a buffalo. It was forever doomed to look downward thanks to its heavy head. Pliny the Elder thought that the catoblepas's down-turned head was a rather fortunate adaptation, given that anything that made eye contact with it turned to stone. Another Roman historian disagreed about the beast's infamous stone gaze, but gave it toxic breath as compensation. Either way, the wildebeest, a real animal, was suddenly on par with the infamous basilisk. The main differences: catoblepas had the decency to keep its head down and could run you over if its breath and gaze did not do the job. Wildebeest have no such superpowers, but they are weird-looking enough to make one wonder.

And if they do have superpowers? There is no benevolent deity out there. Period. They already killed Mufasa unintentionally. We're next.
Posted by KuroKarasu at 11:45 PM