OK, I gipped you guys yesterday and the day before. Here's a cool entry to make up for my doing nothing but quoting a newspaper and a disgusting YouTube video.

Let's look at Dinosaur Satan for a minute. Dinosaur Satan, properly called Carnotaurus sastrei, was found in an Argentinian deposit dating back to the Late Cretaceous. As the name "meat-eating bull" would indicate, it was a giant, carnivorous beast with pointy horns. It was roughly 8 meters from head to tail and a little over 3 meters high. We don't know what it ate beyond "meat," but large sauropods may have been on the menu.

The Carnotaurus is probably the last dinosaur you would ever want to see in a dark alley. It's big, its mouth is full of teeth, and it can turn its head unlike any other theropod. It had binocular vision, which means, yes, both eyes would be sizing you up like a cheeseburger. Oh, and then there are those horns. Nobody knows what those horns were for, but after the teeth and the front-facing eyes, would you really want to risk being skewered by them? Didn't think so.

Then it would come out farther and you'd see its hands. Carnotaurus had the most useless forelimbs of any dinosaur, even compared to the weird two-fingered hands of T.rex. They had four digits total, but only two were functional. Even those lacked claws and were largely vestigial in nature. One may have been a combat spur, but the range would be very poor.The limbs on Carnotaurus do not even have joints. 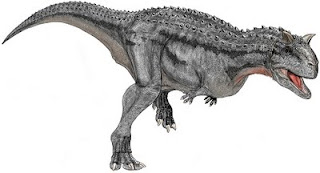 What Carnotaurus lacked in dexterity it made up for in speed. Look at a good drawing and it's easy to see that Carnotaurus was built like an ostrich. Long neck, legs, and tail mean that it was built for speed. There's a chance that it was the fastest non-avian dino to ever walk the earth, running at up to speeds of 31 m.p.h (50 km/h).

Although Carnotaurus had a lot in common with feathered dinosaurs, we actually have a good record of this dinosaur's skin.  Unlike some other large carnivores, the sample of Carnotaurus skin we have is rough and bumpy - more like a lizard's than a bird's. Like the skin of an alien crocodile, This thing was not only fast, it was armored. In other words, Carny is prime dragon fodder. 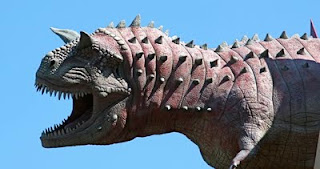 This potential has not gone unnoticed by filmmakers. The main antagonist in Dinosaur was a Carnotaurus. Jurassic Park II, the book only,  also had a Carnotaurus in it. Alas, it lacks the 'true terror' status...so far.