At the Lit Fair today, one author who wrote a book about shapeshifters and other superpowers got into a convo with me about GloFish. She herself was a bio major at Northwestern, so she got a huge kick out of us now being able to make zebra danios in every color of the rainbow. She thought her son would get a kick out of them, too. Well, whatever it takes to possibly make glowing rats (or snakes!) into pets works, I suppose. 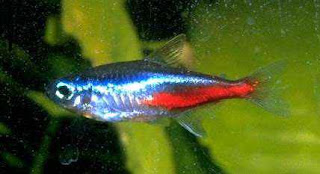 For those of us who aren't so keen on Frankenfish, there are neon tetras. Neon tetras are among the most popular and manageable aquarium fish around, along with being beautiful to boot. Most specimens in the U.S. are imported from Thailand or Hong Kong, but the fish is actually native to South America. This entry is just about the neon tetra Paracheirodon innesi - any other 'neon tetras' don't count, here.

Now, to be fair, neon tetras do not glow like GloFish. They instead have a bright blue, iridescent stripe running along their bodies. This evolved so that other neon tetras can recognize them in the darkwater rivers of Brazil, Peru, and Colombia.  The stripe and red marking actually become duller when the fish rests - a neat color-changing trick rarely seen on land. Still, this is probably as close as you're going to get to a 'natural' GloFish, especially if you're on a budget.  Buy a school of them; they'll be happier and more colorful that way. 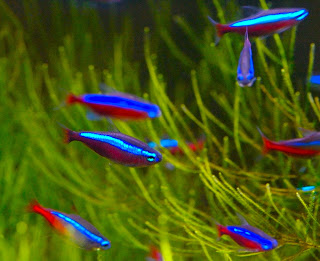 Neon tetras are omnivorous. While they will do fine on flake food in captivity, some meatier things like brine shrimp are also recommended.  Some special pellet foods even contain supplements to enhance the tetras' natural coloration. Bear in mind that they'll still dull a little when stressed or tired. They may not be what most people think of when they hear "Omnivorous fish," but they won't be happy on fish flakes. They also get along well with other tetras and guppies. (Do your research, as usual.)

Although generally seen as a 'starter fish' for tropical fishkeeping, neon tetras have one nasty disease. It's simply called "Neon Tetra Disease" and is characterized by restlessness, loss of color, cysts, and difficulty swimming. Despite tetras being a very popular fish, there is no cure for the disease.  Since tetras are hard to breed (again, despite their popularity), you will likely have to dispose of all the tetras and buy more from Thailand if they get hit with NTD. Tetras are beautiful fish, but beauty is far from permanent.