So yeah. Yesterday consisted of 75 miles of country road, Gatorade, water, and lots and lots of bikes. I'm still a bit tired and sunburned from that, but regular updates to this blog will resume starting now. 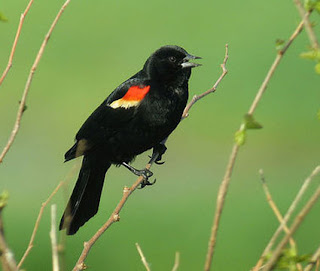 That's a Red-winged blackbird (Agelaius phoeniceus), which I saw in abundance in 75 miles' worth of farmland. (No,that is not my pic.)  The RWB ranges from Alaska to Guatemala, covering all of the U.S. down to Mexico. It is an omnivore, eating insects and seeds. Far from being on the endangered list, it is probably the most common and well-documented bird in North America.If you live in North America, you've probably already seen it. There are several subspecies, so your local blackbird may not match the pic above.

Just because the RWB is common doesn't mean it's not neat. The female and male Red-winged blackbird look absolutely nothing alike. The female almost looks like a very large sparrow - very brown with dark brown markings - in sharp contrast with the male's striking colors. One would not even think they were the same species at first glance. Point is, if you see a black bird with red shoulders, 1) it's probably a RWB, 2. it's a male for sure. Some just look brighter than others. 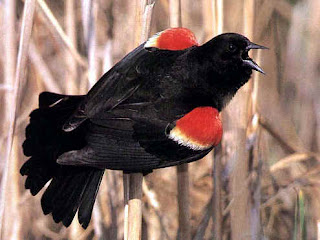 Let's talk about those cool feathers for a bit. The rings of red and yellow are properly called "epaulets" and vary in the amount of red and/or yellow with the subspecies. I'm thinking this little blackbird has monster potential- maybe as a Fire/Flying Pokemon with insane sexual dimorphism, but more likely a mechanical sunbird that either has the discs on fire or uses them as a frame for mechanical feathers. It's already got phoeniceus in the species name- perfect fodder is perfect.

Like most birds, RWB's also sing. Instead of being melodious, however, it sounds like a machine trying to make music. I can't picture an instrument playing its song. I really don't even know how to describe it, so please turn to the YT video below for a soundbyte. It's a very distinct call that, knowing birds, probably varies heavily with region and/or function.


Does being common stop birds like this from being cool? Nope! That song makes me turn my head any time I hear it. Plus, cardinals are cute, but a bit overrated; why aren't more states using this bird to show off? (I'm seriously tired. Really. This entry barely became a thing.)
Posted by KuroKarasu at 11:42 PM