And now for something completely different: The parts of the body.

No, you are not hallucinating or looking at a very unique anatomy book. The above is one of the figures in Body Worlds, a traveling exhibit that puts human corpses on display without the use of formaldehyde. It's like looking at one of those books with flip-over anatomical charts...only it's 3-D and you're forbidden to touch it.

The plastination process used on these bodies was invented by one Gunther von Hagens. He got the idea from a research project in which he was required to slice human kidneys. In a story that sounds straight out of some horror movie, von Hagens began experimenting with the kidney further. He first attempted to preserve it in plexiglass with mediocre results. A complex process involving three baths in silicon and a lab kiln resulted in the first-ever plastinated organ. The full extent of the process is secret; otherwise, we're sure Damien Hirst would have made a flying plastic pig by now and called it "original." We suspect something along the lines of "It's AALLIIIIVE!" cropped up somewhere in the process, but don't quote us on it. 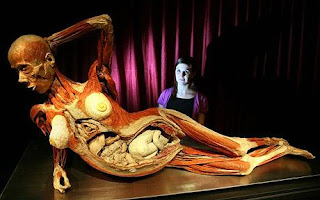 Since then, plastination has been used to put bodies into strange, amazing poses. Name a sport; these people have a body posed in it. Hell, someone even managed to squeeze someone on horseback into a silicon-posed sculpture. There was also a controversial piece with a pregnant woman...showing her plasticized baby for all to see. This exhibit is not for the faint of heart.

Body Worlds is constantly traveling and updating its selection of preserved bodies. To see when/if a Body Worlds exhibit is coming to a museum near you, please click here. To donate a body...well, there's a link for that, too. Honestly, aside from the whole "not being buried" thing (it was a big deal in ancient Greece),  it's not a bad use for one's body. Sorta like a postmortem rock concert, if ya will. 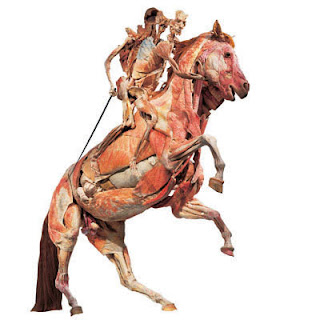 That said...is this art? I would certainly say so. Even though von Hagens has explicitly said that he never intends sensation to overshadow the educational aspects of his work, he does admit that he has to make controversial pieces - just like an artist. My only lament is that they haven't really gone the freak show route and made a few sculptures devoted to mythical hybrids, like a bull's head on a man's body or a plasticized centaur. They've already got a full guy on a full horse; how hard could it be? Get creative!
Posted by KuroKarasu at 11:06 PM