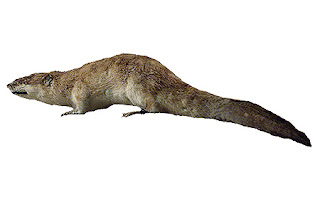 Wait a second. Wait just a doggone second. You already did otters. Sure, those were sea otters and this looks more like a river otter, and otters are always a ton of fun to watch, but still.

Thing is, this isn't an otter. It's not even related to otters aside from being a mammal. The creature up there is a giant otter shrew (Potamogale velox), which is neither an otter nor a shrew. It is properly a tenrec, native to the forest streams of sub-Saharan Africa. As one might expect, it is a piscivorous, freshwater mammal. Rodent or mustelid it is not.

For those of you who do not recall my Madagascar Week, tenrecs are the weirdest and most diverse members of Afrotheria. They are known for mimicking other, 'normal' animals uncannily well. Unlike most mammals, tenrecs have cloacae (a single opening for defecating, urinating, and birthing) and sport unusually low body temperatures. They're like the marsupials of Madagascar. 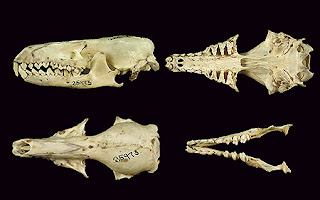 That said, the parts that aren't distinctly otterlike stick out. Unlike otters - hell, unlike marine mammals like dolphins and manatees (to whom the tenrecs are related) - the otter shrew's spine moves side to side like a crocodile's while it's swimming. It also has a crazy skull that looks almost like it belongs on a crocodile more than any sort of mammal. The primitive side of tenrecs is crystal clear beneath that otter facade.

Tenrecs are among those animals that I simply cannot comprehend people not loving. There's a certain charm to a group of animals so like 'normal' animals, but so very far away on a genetic level. Oh, and this one might be more like Pikachu than a rodent, too.
Posted by KuroKarasu at 7:43 PM