Going green is a huge deal nowadays. Basically, we've realized that a whole lot of Earth's resources - fossil fuels, fresh water, wood - are finite, especially if we keep using them at the rate we have been. The meat industry happens to be one of the least green industries out there, responsible for as much greenhouse gases as public transportation (if not more). So, if we told you that some scientists had designed a greener, more energy-efficient chicken, you would assume that there was some horrible catch, right? 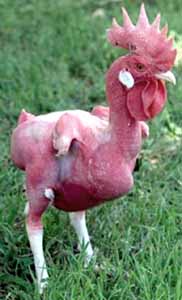 Umm...does a chicken with a big "fry me" sign written on it due to lack of feathers strike you as a  "horrible catch?"

The "featherless" or "naked" chickens were developed by scientists at the Rehovot Agronomy Institute located near Tel Aviv, Israel in the early 2000's. They are not genetically spliced with something that makes 'em lose their feathers. They have been selectively bred that way without the use of other organisms, so no complaining about Frankenfood. We would nonetheless like to add "zombiebird" to the list of potential names for the rooster above.

This chicken is not only easy to cook, but it is supposedly greener than your average chicken. Supposedly, it grows faster and is more energy efficient. Overheating is a real problem for chickens, especially in hotter climates. Too much heat might even lead to ugly, irregular molting, so the next best idea after turning up the A/C is to breed a chicken that doesn't have feathers to begin with.They are also supposedly low-fat. 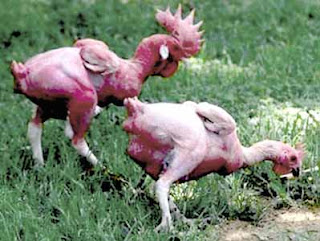 Breeding a featherless chicken also saves considerable time and water on the part of farmers. If you have ever skinned, de-scaled, or de-feathered a fresh kill, you know that it is very time-consuming. On large-scale farms, the feathers are washed off, so breeding for no feathers curbs the fresh water issue, too. Sounds almost too good to be true, doesn't it?

There are some cons to having no feathers, obviously. These birds can live in exactly one climate: Hot and dry. Everywhere else, they have problems. No feathers means no protection from cold, parasites, or even the pecking of other chickens. Speaking of other chickens, plumage is also an important part of chicken mating rituals. I don't know what the human equivalent of this would be; it's just plain unattractive to be a featherless chicken.

Can selective breeding for exactly one trait really have that much impact on the farming potential of one animal? Sure. Anything with "Angora" in its name tends to do better in Ankara, Turkey, than anywhere else. Those animals are mainly bred for extremely long hair and are clearly meant for that climate. These chickens are also meant for a specific climate. If we see chicken meat coming in from Israel, we'll know that their zombiebird project was a success.
Posted by KuroKarasu at 11:29 PM