Remember Eduardo Kac's GFP Bunny project? The one in which Alba, the glowing green bunny, was supposed to be integrated into normal bunny life?  He intended to take that project to the next level by creating a GFP dog (GFP K-9). It fell through, but here's a nice Photoshopped prototype:

Luckily for Eduardo Kac, scientists in South Korea have been hard at work making glowing puppies real. They have made glowing dogs with an on-off switch. They also made Ruppy, a beagle that glows red, in 2009. I would make a joke about eating dog, but dog research is actually legitimate in some cases. In Ruppy's...you make the call. 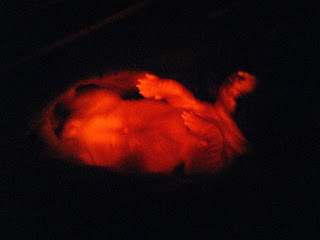 Ruppy was spliced with a RFP (red fluorescent protein), making her the first transgenic dog ever.  In plain English, that means she glows red beneath ultraviolet light. The pigment is not nearly as widespread as someone like Kac would like it to be; only the spots that would normally be white on a beagle's coat wind up glowing red. Still better than nothing. Remember, we got no proof that Alba actually glowed except her slightly green coloration.

She is also a cloned dog, which opens a few more cans of worms. When you get to cloning dogs as well as mice, rabbits, and rats, you now have conclusive proof that many species of mammals can be cloned safely. This naturally opens the door to questions about human cloning. Dogs are pretty darn close to people in society ("low-class people" or "high-class animals," I've heard). You would have to be living under a rock to not get how controversial cloning humans is. Dog cloning is getting there. 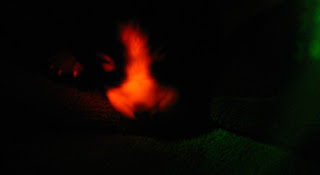 Let's be perfectly honest: What reason would science have to make a glowing dog other than "hey, look, we made a glowing dog!"?  You can make the "genetic disease research" argument all you like. There are very few reasons to make dogs glow. Sure, if they had a natural glowing gene that only dogs had, that'd be a good reason to breed glowing dogs; as-is, we can probably stick with rabbits and rats when it comes to treating Parkinson's.The clip in a link cited several diseases that dogs and humans have in common, but part of me just thinks they're pulling an Eduardo Kac and making their genetic research look cool in the process.

The most plausible reason to experiment on dogs is to look at things that change with age, specifically fertility. The same scientist who made Ruppy is working on a project with oestrus triggers. We can only assume that a hose will be involved. Whether these tests will be repeated on humans or not remains to be seen.
Posted by KuroKarasu at 11:01 PM