Fungus Among Us: Athlete's Foot.

Today's entry has to be one of the least glamorous ever. Really, we've done the majestic bald eagle, cool big cats, and giant blue iguanas...but athlete's foot? This has to be a new low for the blog. That's coming from the woman who finds tapeworms kinda cute.

Actually, I find athlete's foot fascinating in the same way I find pigeons fascinating. Athlete's foot is one of those mundane things that we take for granted. I'm sure people still consider fungi gross, but isn't it at least somewhat impressive that one has evolved seemingly specifically to invade our bathing spaces? 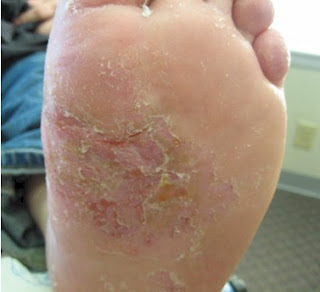 Yes, athlete's foot is caused by a fungus. Also called tinea pedis, it's usually the work of Trichtophyton rubrum or T. mentagrophytes. It thrives in dark, moist areas and is spread in places where people go barefoot, such as gym lockers and For whatever reason, it prefers the crevice between toes 4 and 5 on most individuals. Who knew a fungus could be so picky?

Athlete's foot manifests itself as a rapid peeling of the skin on the bottom of one's foot. It's more of an annoyance than truly painful unless you obsessively peel away the skin. Most of the time, you know athlete's foot when you see it. It itches like crazy, but has a million easily-accessible cures to prevent you from clawing your feet red. If you haven't encountered it yet, you have never been in a gym.

Usually, athlete's foot is nothing to worry about. There are plenty of over-the-counter remedies and  If left untreated, however, it can lead to the exposure of raw skin and bleeding. Such cuts open the way for more severe bacterial infections. Athlete's foot can also spread to the crotch, by the way, but "athlete's groin" is so unceremonious that we have to call it "tinea cruris."

Never badmouth a fungus that can attack your crotch. You never know when it might be listening.

Posted by KuroKarasu at 2:31 AM

Email ThisBlogThis!Share to TwitterShare to FacebookShare to Pinterest
Labels: effing everywhere, fungi, fungus among us