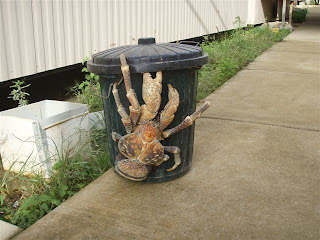 The above image circulated in a chain e-mail released in 2007. It features a coconut crab, AKA  robber crab, palm thief, or Birgus latro ("robber" in the species name).  Since then, other images and messages concerning this giant crab have circulated as well...and most of it is absolutely true. The coconut crab is not a bonsai kitten; absolutely nothing was Photoshopped; it's all 100% real.

OK, so coconut crabs are not the biggest crabs around. I lied a little. The proper title of "biggest crab" goes to the spider crab, a creature dwelling in darkness with long, spindly legs.They will get their own entry. For now, the coconut crab stands as the largest land invertebrate in the modern era; it sports a 3-foot leg span, can get up to 16 inches from head to abdomen, and weighs up to nine pounds. Unless Mothra shows up, the coconut crab will be king for a looooong time.

Guess what? These terrors are related to the cute little hermit crabs we covered yesterday. Like hermit crabs, young coconut crabs spend some of their lives in snail shells. They never go back to the ocean except to lay eggs, and will drown if placed in water. Much the same can be said of land hermit crabs, although hermit crabs still need humidity to be happy.You will never see hermit crabs the same way again after looking at a coconut crab.

Luckily for us, these monster crabs are primarily herbivores. True to their name, they are fond of coconuts, which they climb trees for and can crack open with those claws.  Other fruits and nuts are on the menu as well. The distribution of coconut crabs is tied exactly with coconut trees. Hell, they even have a remarkably well-developed sense of smell for a crab - enough that it's an eerily close parallel with that of insects. They'll eat meat (small animals and carcasses) on occasion, but for the most part, they will stick to fruit and nuts. 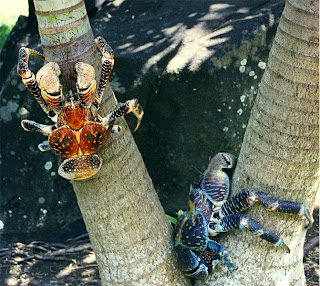 Coconut crabs are indeed edible, by the way. They are considered a delicacy on their island homes. Who cares if it's big and terrifying? That's a lot of crab meat.  The locals consider it a delicacy and an aphrodisiac, however, so the crab meat might be a little hard to come by.

Y'know what, though? It doesn't matter that these crabs are delicious. They've been here longer than humans and will be around long after we are gone. I actually saw one artist who validly pointed out that snakes and rodents will be around long after the human race is dead; cockroaches are survival experts. Now we can add giant, killer crabs to the list.  Basically, if you happen to be warm-blooded, global climate change will screw you over. We're doomed, and the whole rest of the animal kingdom is laughing at us. The creep shall inherit the Earth.