Rodents are very successful animals. After the dinosaurs died out 65 million years ago, they evolved to spawn like crazy and chew through anything that their giant incisors possibly could. They are currently the most diverse group of mammal if not the most populous. Overall, they are solid survivors.

We are also talking about rodents that made structures like this:

That is called a "Devil's Corkscrew." These, umm, screwy formations can go up to three meters down into the soil. They appeared around areas that either currently had water or were known to be near lakes in the past. Such areas include Nebraska and North Dakota, places where there is nothing today.

For the longest time, nobody knew what the hell the Devil's Corkscrew was. Some suggested it was a type of freshwater sponge; others said it was ancient vegetation. It was not until a giant rodent's skeleton was found in one of the curls that people figured out what this silly straw of a geological formation was: A burrow.

Now, if I told you all to name a type of rodent found near water, what would you say?

If you said a beaver, congrats: the nutria have not invaded your area yet. The Devil's Corkscrews were indeed made by Palaeocastor (lit. 'ancient beaver'). There were several species of Palaeocastor with varying sizes. These beavers lived during the Oligocene Period in the North American Badlands (told you those places sucked). Castroides, a beaver the size of a bear, evolved later. 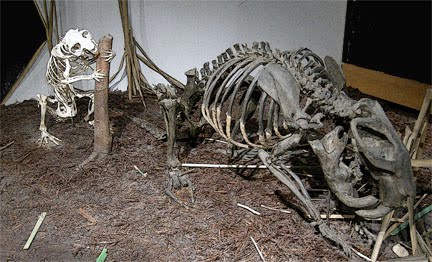 Leave it to beaver to terrify us all.

Devil's Corkscrews were made by Palaeocastor eating its way through the earth as opposed to digging. As with modern beavers, fossil evidence says that these ancient beavers had large families. Picture that for a minute: A family of rodents with teeth strong enough to chew through the earth. There is a modern rodent that does that, too:

You'll be seeing it in your nightmares. We think the ancient beavers at least had fur.

What reduced the beaver family from several species to only two extant members? Probably competition. Although beavers were always around water, Palaeocastor were more terrestrial. There was less competition for marine rodents, so the result was the webbed-footed, paddle-tailed animal found all over Canada, the northern U.S., and Europe.

So the burrows and giant beavers are pretty strange, but how about something bigger? Check back tomorrow.
Posted by KuroKarasu at 10:13 AM