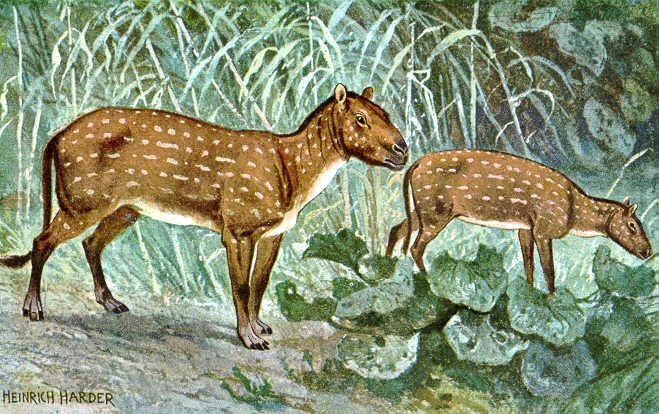 The creature above is likely the ultimate Uncanny Valley beast. Its name is Hyracotherium, it lived in Asia, Europe, and North America, and it was about the size of a fox. It lived during the early Eocene (52 mya) - a time when, for reference, we had a relative named "Necrolemur." Hyracotherium looks like a creature that we all should know, but do not. We've seen this animal before, but where? Goddammit, it's on the tip of my tongue...

You have got to be kidding me.That little guy? A horse? He's got to be smaller than the smallest horse in Guinness.

Technically, Hyracotherium is no longer a horse. It's a palaeothere- a type of ancient mammal that shows the starting traits of being a perissodactyl (odd-toed ungulate). There is still some debate over exactly where it belongs, but it did give rise to horses, regardless of whether it can legally be considered an equine or not. The old name for it was Eohippus - "dawn horse."

Hyracotherium is the oldest known ancestor of the modern equines, including horses, asses, and zebras. It started as a small creature with the five digits common to tetrapods. As time went on,  these little fellows became faster and faster, as well as bigger and bigger from eating new plants.The horse family lost toes until only the center digit remained and became encased in a sturdy hoof. They also evolved to love sugar cubes (irony!). 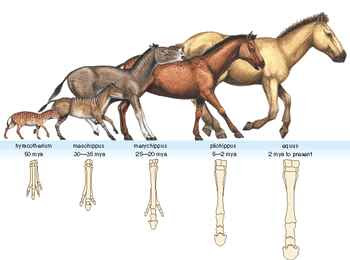 Some scientists also propose that Hyracotherium founded other perissodactyl lines, such as rhinoceroses and tapirs. Those are pretty neat, too; tomorrow will feature a look at brontotheres, creatures that look like rhinos but may have been more closely related to horses. If only Nintendo had some creativity left; Hyracotherium would be a great fossil Pokemon to make a three-way evo out of.
Posted by KuroKarasu at 4:38 PM