If there is one thing that I can definitely thank the exotic pet trade for, it is the amazing potential it has to open people up to other species. Even if you personally do not have, say, a Baron's Racer, with exotic pets around we at least know they exist. One could even make the case that breeding for nifty colors in things like ball pythons is more sane than the crazy gene splicing scientists do. Most importantly, however, I would NOT have known that today's creature existed if I had not seen it in Reptiles magazine. 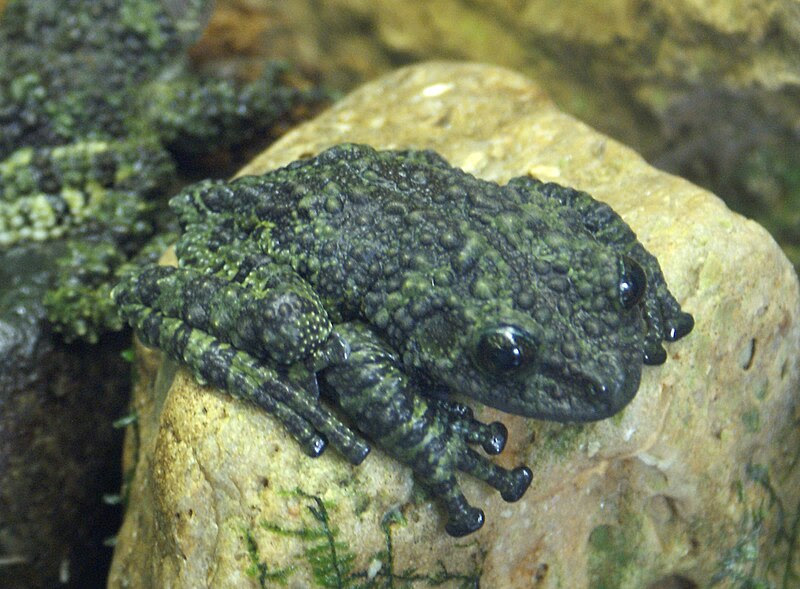 The Vietnamese Mossy Frog (Theloderma corticale) is native to the wetter climates of Vietnam and China. Its habitat ranges from tropical-subtropical to the Hanoi mountain range. Much of its time is spent in shallow water with only its bug-eyes poking above the surface. It has been described as looking "alien" or like Godzilla. Neither of these descriptions do this frog's amazing mossy camouflage justice.

The camouflage of the mossy tree frog is said to be the best in the whole animal kingdom. (I personally think it has competition in the matamata, the three-toed sloth, and the tawny frogmouth.) It makes seadragon camouflage look like neon lighting. The tubercules on its skin and its coloration both contribute to the image of a lump of moss - nothing to see here! If the frog is sitting perfectly still, it is near-impossible to pick out.

Herpers (people who keep reptiles and amphibians) have several reasons to love this little frog. It can endure a wide range of temperatures and humidity. It eats crickets voraciously. If you make your terrarium right, you can observe this frog's whole life cycle in one cage. Of course, it's also fun to get one of these frogs, name him Waldo, and invite guests over to try and pick him out from his fancy foliage. These frogs like hiding, so they should be a challenge to find.

Like almost all cool frogs, the Vietnamese Mossy Frog is threatened by habitat loss. This makes captive breeding programs not only awesome, but critical to the survival of the species. They are currently protected by the Vietnamese government, so, should you invest in these frogs, be sure that they were captive-bred. In the worst case scenario, we will have another scimitar-horned oryx on our hands.
Posted by KuroKarasu at 6:22 PM