MERRY CHRISTMAS! I'm not going to go "it's the most wonderful time of the year," but if Christmas makes you happy, I hope you had a good one. Today's entry is just as festive as yesterday's, so hold onto your Santa hats!

Around this time of the year, poinsettia pop up all over grocery stores, flower shops, and advanced nurseries.The poinsettia (Euphorbia pulcherrima) is a classic Christmas plant owing to its red and green coloration. It is a shrub-slash-very small tree native to Mexico. It is named after Joel Roberts Poinsett, the first United States Minister to Mexico. Since ancient times, its red leaves have been used as a dye and to soothe fevers.

The poinsettia has a number of legends concerning its origin in its native Mexico. One legend has it that an angel told a child to pick some weeds from the road and bring them to the altar of a church; the poinsettia resulted. The poinsettia's starlike shape supposedly represents the Star of Bethlehem. The red could also be from Christ's dripping blood. No matter how you slice it, some religious significance can be attached to this plant. 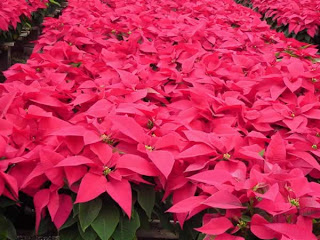 The first poinsettia plants were introduced to the U.S. in 1825 by, go figure, Joel Poinsett. However, much of the cultivation was done almost exclusively by the Ecke family. Using grafting to make the plants become more tidy than their weedy counterparts, they became the sole cultivators of the popular, bushy poinsettias we know today. Others eventually figured out the grafting trick, but the Ecke family still owns a large amount of the poinsettias on the market - roughly 70% in the U.S. and 50% worldwide. In short, we owe them.

Contrary to popular belief, poinsettia are not deadly to humans. They are only slightly poisonous. The most eating poinsettia will do is make one vomit. To put things in perspective, a 50-pound child would have to eat 500 poinsettia leaves to feel any ill effects beyond that. We would still advise keeping pets away from the plants, however; plants have poison for a reason. Look, don't eat.
Posted by KuroKarasu at 9:02 PM